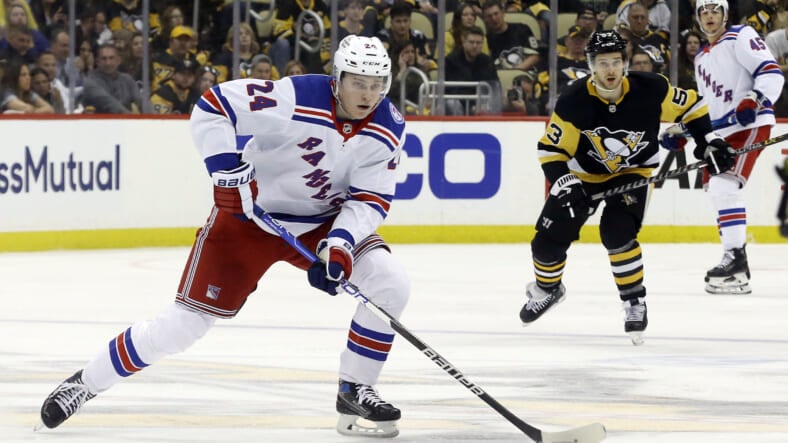 May 9, 2022; Pittsburgh, Pennsylvania, USA; New York Rangers right wing Kaapo Kakko (24) skates with the puck against the Pittsburgh Penguins during the third period in game four of the first round of the 2022 Stanley Cup Playoffs at PPG Paints Arena. The Penguins won 7-2. Mandatory Credit: Charles LeClaire-USA TODAY Sports

When Group A took to the ice in Tarrytown, N.Y., on Sunday morning, many believed these would be the players to play in the team’s first preseason game on Monday at Madison Square Garden.

Gerard Gallant later confirmed this would be the first group to play, “the morning practice group will be the game group tomorrow, for the most part.”

The lines are not the same as what Gallant has used in the scrimmages that began last Thursday. That’s based on the players inserted into Group A on Sunday and the coaching staff taking the opportunity to look at some players early in the preseason schedule.

Kaappo Kakko had been playing with Alexis Lafreniere and Filip Chytil, but tomorrow skates with Mika Zibanejad and Chris Kreider.

The fourth line consists of two rookies that most likely won’t see opening night, but this year’s first-round pick (Sykora) along with the Gold Medal winner in its years World Championships Othmann should be an entertaining combination.

Vesey will try to impress the club when he plays with Chytil and Kravtsov. On the topic of impressions, Kravtsov will try to erase the memory of the way he exited the club last season and finally began a promising career with the Blueshirts.

On the Blueline, two players vying for the sixth defense spot will be on the ice, with both Jones and Hajek projected to play.

Monday’s game will be televised on MSGN at 7 pm.