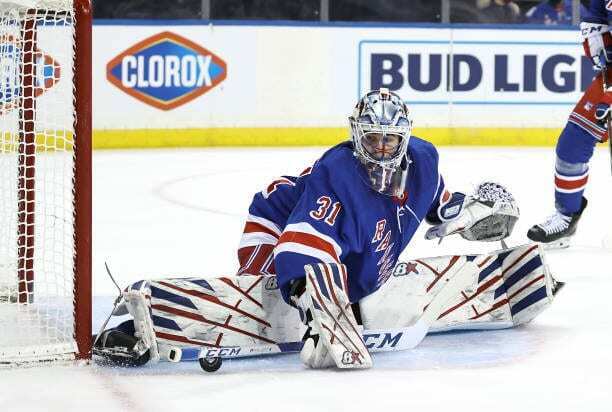 The New York Rangers will not have Igor Shesterkin as he was placed in Covid protocol prior to the start of their game against the Vegas Golden Knights on Thursday night.

The New York Rangers received some bad news before the start of the game against the Vegas Golden Knights as Igor Shesterkin was placed in Covid Protocol.  Alexandar Georgiev was to start the game and Keith Kinkaid was recalled from the taxi squad to back up Georgiev.

BUFFALO, NY – JANUARY 26: Alexandar Georgiev #40 of the New York Rangers before the game against the Buffalo Sabres at KeyBank Center on January 26 , 2021 in Buffalo, New York. (Photo by Kevin Hoffman/Getty Images)

With the new NHL Covid rules, Shesterkin will be out of the lineup for the next five days.  Following tonight’s contest, he will miss Saturday night’s game at Anaheim and Monday’s game against the Los Angeles Kings.  He will be eligible to return, as long as he has no symptoms, next Thursday when the club visits the Saan Jose Sharks.

Shesterkin has last played in the team’s 4-0 shutout win over the Tampa Bay Lightning at the Garden on Jan. 2.