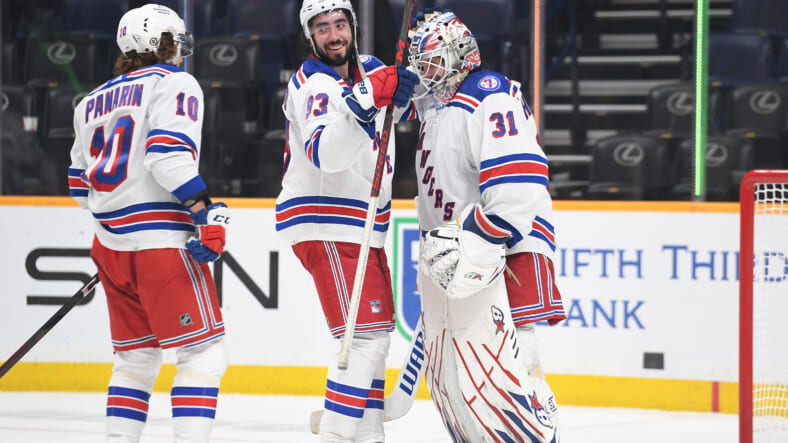 The New York Rangers look to continue their road point streak as they visit the Edmonton Oilers Friday night.

The New York Rangers will need a strong game plan to keep the road points streak alive tonight as they face-off against the Oilers tonight in the first of two meetings this season.

Artemi Panarin is currently riding a three-game point-streak (1G-5A) and has recorded points in seven of 10 games this season. Panarin has secured a multi-point game in two of his last three games. Since Panarin entered the NHL in 2015-16, only six players have registered more multi-point games than Panarinâ€™s 13.

The Rangers have earned at least one point in six of seven road games (5-1-1) this season. The Rangers are tied with Calgary for the most road wins in the NHL.

During practice yesterday, the Rangers used the following line combinations;

**Reaves will be a game time decision.

â€¢ 1 goal from passing Phil Esposito (184) for the 15th most goals scored in franchise history.

â€¢ 1 goal from passing Bill Fairbairn (138) for 31 on Ranger all-time scoring list
â€¢ 1 SHG will tie in the franchiseâ€™s top 10 for most shorthanded goals by a Rangers playerâ€¢ 1 overtime goal away from tying Cecil Dillon, Butch Keeling, and Brian Leetch (7 each) for the most overtime goals by a player in Rangers history.

Kevin Lowe’s #4 to be raised to the rafters

The Oilers will retire Kevin Lowes number 4 in a pre-game ceremony. Lowe played four seasons with the Rangers, helping them win the Stanley Cup in 1994.