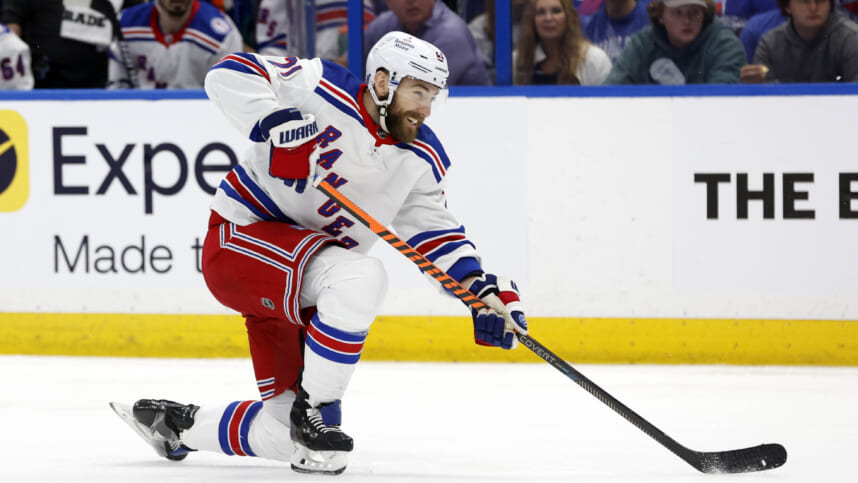 The New York Rangers will have their most formidable challenge of the young season when they host the defending Stanley Cup Champion Colorado Avalanche on Wednesday night at Madison Square Garden.

The New York Rangers will play the first end of back-to-back games beginning on Wednesday night when they host the Colorado Avalanche.

They will do so without center Filip Chytil, who suffered an upper-body injury in the team’s 5-1 loss to the Columbus Blue Jackets on Sunday night.

Chytil took an elbow to the head from the Blue Jackets forward Cole Sillinger early in the first period. He headed straight to the locker room and did not return. The timeline of the injury suggests Chytil might have suffered a concussion, but the club only announced that he would miss the next four games on Monday.

The Rangers did not recall any players from Hartford and will continue to keep a 22-man roster.

At yesterday’s practice, Gerard Gallant had Libor Hajek skating with Brendan Schneider, indicating that Zac Jones would be the team’s only scratch.

The combinations at Monday’s practice were;

The New York Ranger’s power play is 9th in the NHL at 26.1%. The Avalanche lead the league with the man advantage scoring 52.9% of the time on the power play.

Former New York Rangers netminder Alexandar Georgiev will visit Broadway for the first time since his trade to the Avalanche last offseason. Geo played five years with the Rangers appearing in 129 games. During that time, he complied a 58-48-11 record primarily as a backup to Henrik Lundqvist and Shestrkin.

-In six games, 10 players have scored a goal, 12 have notched an assist, and 14 skaters have recorded at least one point. A different player has led the team in hits in each game as well.

New York has been 50 percent or over in the faceoff circle in four of its six games and over 60 percent in two games. The Rangers’ 66.7 faceoff win percentage on Sunday night against the Blue Jackets was their highest since Feb. 1, 2020, at Detroit (68.9). In the NHL, the Rangers rank tied for eighth with a 53.4 faceoff percentage (175-for-328).

-The Rangers are one of only five teams (BOS, CAR, MTL, OTT) in the NHL to have four or more players with a face-off percentage higher than 50% (minimum 30 draws).

-New York has earned a point in three of its four home contests (2-1-1) to begin the season as they wrap up their second-longest homestand of the season.

-Last season, the Rangers went 27-10-4 for 58 points at home. In the NHL, they ranked tied for seventh in home wins and home points.

-New York’s 27 home wins ranked tied for fourth all-time in franchise history and were their most since the 2015-16 season (also 27 wins).

-Chris Kreider led the Rangers with 28 home goals, tied for the second most in the NHL behind Auston Matthews (32) and tied with Kirill Kaprizov. His 28 goals at home were tied for the most by a Ranger in a single season.