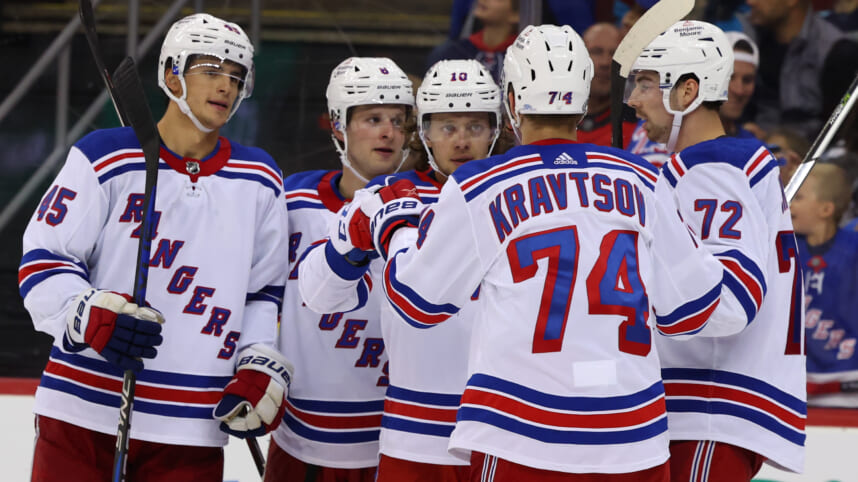 The New York Ranger took a 2-1 comeback win over the New Jersey Devils on Friday night. With just two preseason games remaining, the club may be seeing what the opening night roster will look like.

The final score of any preseason game really has no value, but for the New York Rangers’ 2-1 win over the New Jersey Devils on Friday night, the questions of who is winning individual battles for roster spots have become much clearer.

Zac Jones played 20:28 in the game and seems to be getting closer to being named the sixth defenseman alongside Braden Schenider. The 21-year-old has played with confidence during the rookie training camp, and that has carried over to the Rangers camp.

“Having a full year as a pro last year, and I think that improved my confidence coming into this camp,” Jones said following the game. Zones also logged in 1:34 of ice time on the power play.

In goal, Jaroslav Halak earned the win while stopping all 15 shots he faced in 27:38 of play. Halak has allowed one goal in two appearances this preseason. He is in competition with the starter of the game on Friday night,  Louis Domingue, who recorded10 saves on 11 shots in 32:06 minutes. Domingue played for the Devils for a part of the 2019-20 season.

Halak is poised to be the backup to Igor Shesterkin when the season begins on Oct. 12.

Jimmy Vesey and Dylan Hunt are the two forwards vying for the 13th forward spot in camp. Vesey had another great game and made a goal-saving defensive play late in the game to preserve the win for the Blueshirts.

Vesey played:58 seconds on the power play along with 59 seconds on the penalty-killing unit. Hunt had an assist on the game-winning goal scored by K’Andre Miller, playing 15:07 in the game.

Vitali Kravtsov has appeared to lock in a roster spot on opening night. He had an assist in the game and has become more comfortable on the ice in all three zones. It’s unclear if he will start in the line with Artemi Panarin and Vincent Troucheck when the season begins, but he should hear his name announced at the home opener.

The Rangers have two games left on their preseason schedule;

At NYI on Sunday, Oct. (MSGSN)

Expect the club to trim the roster in the coming days to reflect what the opening night lineup should look like.