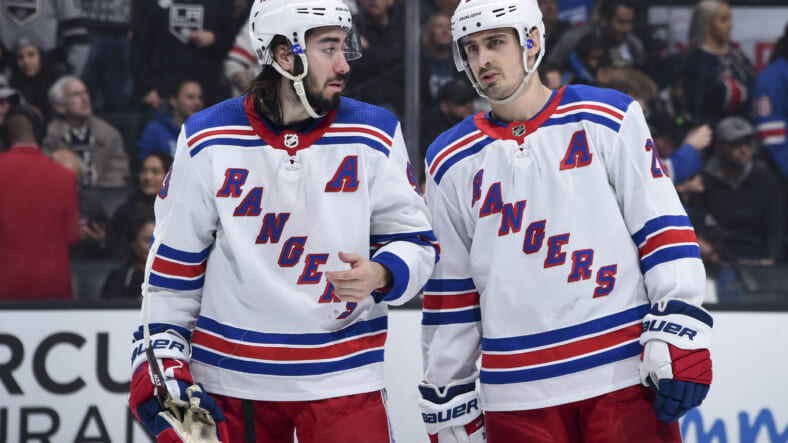 New York Ranger’s right-winger Chris Kreider looked frustrated when he sat at the table for the team’s post-game zoom call with the media following Monday night’s 2-0 loss to the New York Islanders.

His team played a strong defensive game but for a span of 2:05 of the third period where the Islanders were able to put two pucks behind Rangers netminder Igor Shesterkin.

During the Zoom presser, Kreider was asked a question that clearly added to his frustration.

Do you think Mika Zibanejad is playing at 100 given the fact that his production is so low?

“We did it in spurts where we were playing fast and getting behind their D, but doing it in spurts isn’t going to get us the result we want.” – Chris Kreider pic.twitter.com/8aM97fkxNl

Kreider paused before answering the question, his facial expression was one of aggravation to be asked such a question, but he answered it with class and professionalism that is expected from the veteran player.

I mean, regardless if a guy is playing it 100% or not I mean we’re we’re NHL players we’re professionals most guys are dealing with bumps and bruises some guys are playing through worse injuries or sicknesses. But I’m not I’m not going to speak to that that’s something that’s, that’s, you know, stays in the room obviously but yeah he’s played 100%, he’s he’s doing an unbelievable job defensively. He’s, he’s got the tough matchup every single night he’s getting defensive zone draws and in my mind he’s eating up the top players in the league and he’s not. He’s not exactly getting, you know the ozone starts that he would necessarily get because he’s he’s drawing those hard matchups so I think he’s been doing a bang up job. And he’s doing everything he can to help our team win.

Zibanejad had a great night in the circles, winning 85% of the face-offs he took winning 11 out of 13 draws. Adding to what Kreider said about Zibanejads defensive work, Mika won 5 out of 6 defensive draws on Monday night which was 83% efficient.

It is hard to score when you don’t shoot a lot of pucks at the net, Zibanejad was only credited with three shots on goal despite having 25 shifts and 19:30 of ice time.

The Rangers will take on the Boston Bruins on Wednesday night at the Garden. NBCSN has the coverage beginning at 7 p.m.