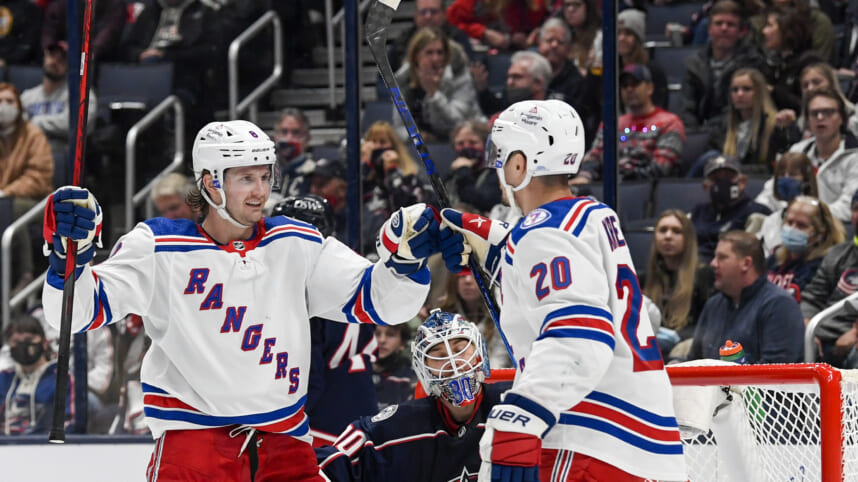 New York Rangers’ Chris Kreider and Jacob Trouba were guests on the Michael Kay Show on Monday as they participated in their annual golf outing at the Westchester Country Club on Monday afternoon.

The New York Rangers had their annual golf outing at the Westchester Country Club on Monday. The Michael Kay Show broadcasted their daily show from the outing and had Chris Kreider and Jacob Trouba as guests, where they discussed the team’s new captain, a surprising playoff run, and fantasy football.

The Blueshirts are getting ready open training camp on Wednesday. As in years past, the organization held its golf outing where most, if not all the players participated.

Two leaders of the team sat down and spoke with Don La Greca, Peter Rosenberg, and Michael Kay about the club’s accomplishments last season and what they need to do to take the next step this season.

The team’s new captain started off the conversation. Trouba is wearing the “C” on his chest, but Kreider’s explanation of why he deserves the captaincy was straight to the point of how proud he and his teammates feel about the decision.

Michael Kay asked Kredier if he thought naming Trouba was the right decision, and the 52-goal scorer from last season had this to say about his new captain;

I think we all thought it was gonna happen a year earlier, to be honest. I mean, it’s a role that he’s filled for a while now, and nice to see it finally come to fruition. I mean, he’s been that player for us for a long time. He’s been very genuine, been himself, and really understands who he is as a leader. I think the biggest thing that we’ve talked about too is his ability to kind of bring everyone into the fold, bounce ideas off other guys, kind of establish that leadership group and really get everyone’s opinions, taking one’s opinions in and then kind of go from there. So that’s kind of how we’ve operated for the last year and it’s nice to kind of see that validation for him.

Their great run in last year’s Stanley Cup Playoffs was impressive, but the Rangers will have the target on their back without the element of surprising their opponents this season. The boys were asked what the Blueshirts need to do to take the next step to win the Stanley Cup.

It’s continuing to improve and understanding that the games are just gonna be harder for us. You know, everyone’s gonna put their best foot forward. So the end of the day that should make us a better team, and we just have to rise to that challenge and start with the goal of ultimately making the playoffs and then going from there.

Continuing with last year’s playoff run, Don Lagrecca mentioned the teams they beat to reach the Eastern Conference Finals and wanted to know what he and the team learned from last year.

I think we learned when we kind of can come together and block out any we didn’t have a chance but to not listen to anything outside we’re playing every other day and it seemed like we’re playing and then it was either travel they’re just basically recovering and then we’re playing again and traveling so it’s it just kind of came to the group of guys and I thought we kind of came together really well and that was what I kind of said all along was we have the players that this guy almost wins the Rocket, you have Igor winning Vezina’s, Foxy he won the Norris, you have some of the top players in the league. There’s no reason that it can’t be us.

The conversation soon switched over to other New York teams, fantasy football, how bad Kreider is in their fantasy league, and Trouba’s favorite football team, the Detroit Lions.

At the conclusion of the interview, one thing is abundantly clear, this is a tight team. In the locker room, on the ice, or on a golf course, the New York Rangers have a group of players that put the other guy first. They have dealt with adversity and drama and found a way to have a 52-win season, and were two wins from the Stanley Cup Finals last season.

The Ranger’s first pre-season game will be on Monday, Sept. 26, vs. the New York Islanders at MSG.

To listen to the entire interview with the Michael Kay Show, click here.