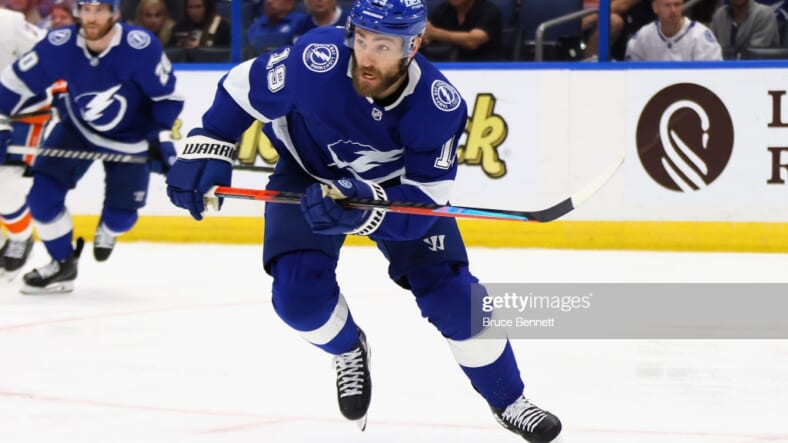 TAMPA, FLORIDA - JUNE 13: Barclay Goodrow #19 of the Tampa Bay Lightning skates against the New York Islanders in Game One of the Stanley Cup Semifinals during the 2021 Stanley Cup Playoffs at the Amalie Arena on June 13, 2021 in Tampa, Florida. The Islanders defeated the Lightning 2-1. (Photo by Bruce Bennett/Getty Images)

The New York Rangers and center Barclay Goodrow appear to be close to agreeing to a new contract that will keep the recently acquired player off the free-agent market.

Reports have been circulating that the New York Rangers are nearing a deal with Barclay Goodrow. The 28-year-old is scheduled to be an unrestricted free agent on July 28. The two-time Stanley Cup Champion was acquired in a trade with the Tampa Bay Lightning on Saturday for a seventh-round pick in the 2022 NHL Draft.

“We’ve talked,” Rangers general manager Chris Drury said to NHL.com’s Mike Zeisberger on Monday. “We’re making progress but nothing to report now. But I don’t anticipate any issues getting him under contract.”

The Rangers have been in desperate need to find a center after this season’s struggle at the position. Â Goodrow has won 52% of the draws he has taken in his career that spans seven seasons in the NHL.

General Â Manager Chris Drury likes what Goodrow brings to the rink every night as he recognized his string game on the ice.

“I think he’s pretty versatile,” Drury said. “I could see him do all different things for Gerard, whether that’s more time in the middle, whether it’s face-offs in the [defensive] zone. But we think he’s got a pretty complete game. He’s going be able to help a lot of different areas.

“He’s a guy that we targeted and obviously went out and made a deal with Tampa early to get a jump on it.”

The 6′-2 203lb native of Toronto, Ontario will fit in the lineup and should be a huge asset to head coach Gerad Gallant he looks to bring an in-your-face, hard to play against game to Broadway.

In his career in the NHL Goodrow has scored 93 points (32 goals, 61 assists) in 331 regular-season games with the Lightning and San Jose Sharks, and 14 points (five goals, nine assists) in 65 playoff games. The Lightning acquired him from the Sharks on Feb. 24, 2020.

The Rangers may have a deal in place with Goodrow, but can not make a formal announcement until Thursday, the day after the Seattle NHL Expansion Draft.