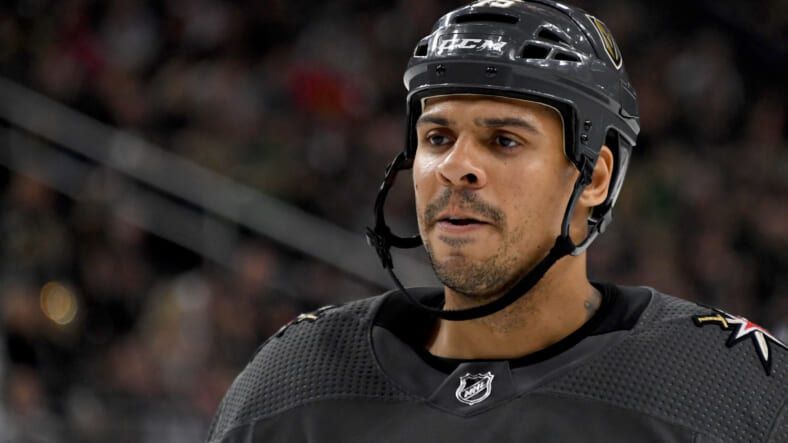 LAS VEGAS, NEVADA - MARCH 03: Ryan Reaves #75 of the Vegas Golden Knights skates on the ice during a stop in play in the first period of a game against the New Jersey Devils at T-Mobile Arena on March 3, 2020 in Las Vegas, Nevada. The Golden Knights defeated the Devils 3-0. (Photo by Ethan Miller/Getty Images)

New York Rangers President and General Manager Chris Drury announced today that the team has acquired forward Ryan Reaves from the Vegas Golden Knights in exchange for a third-round pick in the 2022 NHL Entry Draft.

The New York Rangers solved their lack of toughness and grit when they traded for Ryan Reaves from the Vegas Â Golden Knights on Thursday night. The Blueshirts sent a third-round pick in the 2022 NHL Draft for the 34-year old forward.

Reaves skated in 37 games with Vegas this past season, registering one goal and four assists for five points, along with 27 penalty minutes. He led the NHL (min. 20 games played) in hits per 60 minutes of ice time in 2020-21 (23.02), and he also led the Golden Knights in hits (141) this past season. Reaves skated in 12 games during the 2021 Stanley Cup Playoffs while helping the Golden Knights advance to the Semifinals.

The Winnipeg, Manitoba native was originally selected by St. Louis in the fifth round, 156th overall, of the 2005 NHL Entry Draft.

Reaves has one year remaining on his contract with an AAV of $1.75 million. He will be a UFA at the conclusion of the next season.