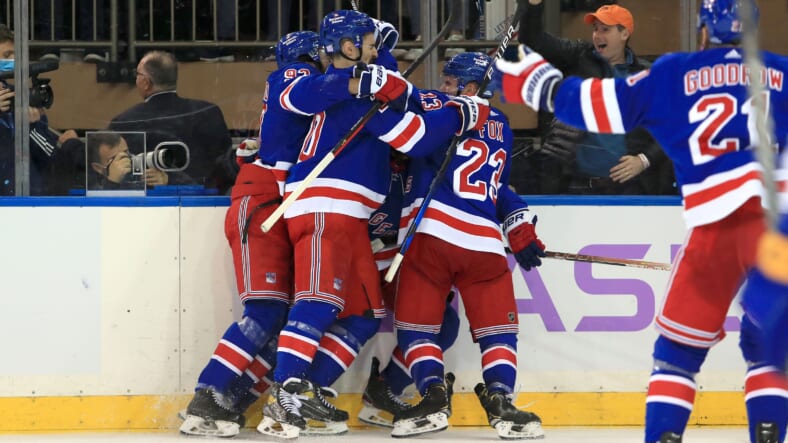 With the NHL suspending cross-border travel, the Rangers will have ten days off before their next game on Dec. 27.

In the wake of the ongoing health crisis, the NHL has postponed all games involving travel between the United States and Canada through Dec. 27. The Rangers’ Wednesday tilt against the Montreal Canadiens was among the dozen games affected by the suspension.

As a result, the Rangers (19-7-4) are next scheduled to play on Dec. 27 against the Detroit Red Wings (7 p.m. ET, MSG). New York ends its pre-Christmas slate in third place in the Metropolitan Division, a point behind both the Carolina Hurricanes and Washington Capitals.

Rising COVID-19 cases across the league have caused some teams to pause their proceedings until after the scheduled end of the holiday break on Dec. 27. With the added dozen brought upon by the border deal, 39 games on the regular season docket will now require rescheduling. The Rangers’ Nov. 28 game against the New York Islanders, brought upon by excess cases with the opponent, has already been moved to March 17.

The NHL and its players’ association released a joint statement on Sunday that vowed to play as many games as possible prior to the Christmas break. Both sides appear dedicated to avoiding a league-wide pause, though players’ participation in the 2022 Winter Olympics in Beijing is in major doubt.

“Though there has been a recent increase in positive COVID test results among Players, coaches and hockey staff, there have been a low number of positive cases that have resulted in concerning symptoms or serious illness,” a joint statement between from the NHL and NHLPA reads. “Therefore, the NHLPAâ€™s and NHLâ€™s medical experts have determined that, with virtually all Players and Club hockey staff fully vaccinated, the need to temporarily shut down individual teams should continue to be made on a case-by-case basis. The effects of recently introduced enhanced prevention and detection measures will be evaluated daily.”

As for the Olympics, which were set to feature NHL players for the first time since the 2014 Games in Sochi, the statement declares that the league and the NHLPA are “actively discussing” the matter of participation. The league’s February schedule features a three-week break to allow for players’ participation in the Beijing Games, but that period of inactive could now be used for rescheduled games.