NHL Draft Lottery to be held Wednesday, Rangers have small chance at No.1 pick 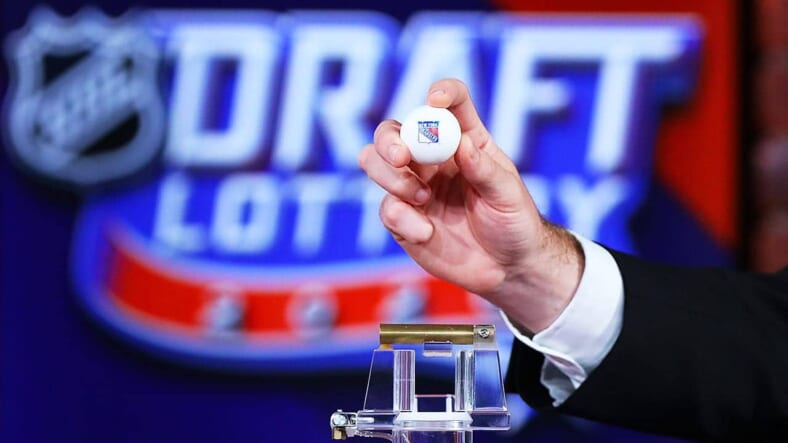 SECAUCUS, NEW JERSEY - AUGUST 10: The New York Rangers are selected No. 1 during Phase 2 of the 2020 NHL Draft Lottery on August 10, 2020 at the NHL Network's studio in Secaucus, New Jersey. (Photo by Mike Stobe/NHLI via Getty Images)

The New York Rangers have a minimal chance to get the number overall pick when the NHL holds its Draft Lottery on Wednesday night.

The New York Rangers have all the odds against them when it comes to winning the number one overall pick in this year’s NHL Draft.

The NHL Draft Lottery will be held on Wednesday night setting up the order for the first 16 selections andÂ can be seen on NBCSN at 7 P.M.

In last year’s Draft Lottery, The Blueshirts won the 2020 lottery and choose Alexis Lafreniere first overall. Â In 2019, the Rangers were lucky enough to win the second overall pick in the 2020 NHL Draft taking Kakko Kappo.

The Kraken has the same lottery placement as the Vegas Golden Knights ahead of their first season in 2017-18 and is guaranteed to pick no lower than No. 5 in the first round.

The NHL announced on March 23 that two drawings will be held, to determine the top two picks in the draft. Since 2016, the first three selections had been determined by the lottery. The change was made to reduce the likelihood of the team with the worst record dropping in the draft order. That means the Sabres will pick no worse than No. 3 in the 2021 draft (via NHL.Com).