New York Rangers: Zac Jones believes he has an opportunity to make squad this season 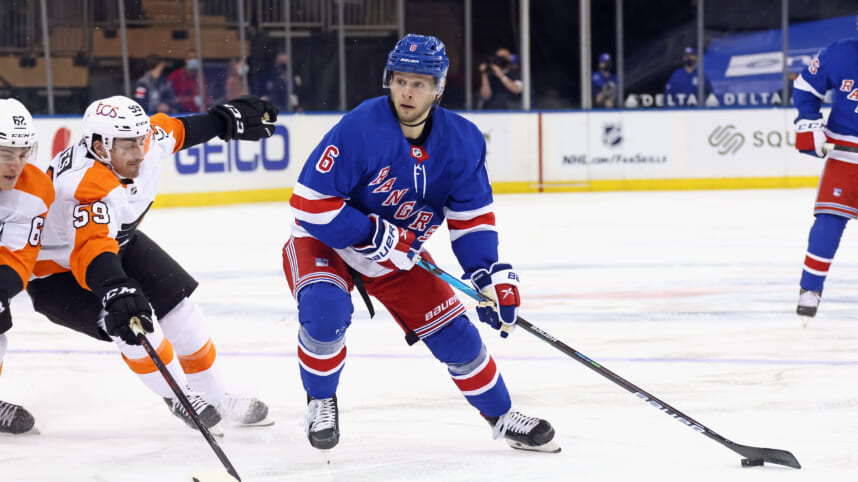 The New York Rangers rookies stepped onto the ice for the first time this season, with defenseman Zac Jones preparing for an opportunity to make the Rangers opening night lineup.

New York Rangers defenseman Zac Jones is committed to doing everything he can do to make the opening night lineup this season.

The 21 year- old Richmond, Virginia native wanted to attend the Rookie Training camp, which began on Wednesday at the Rangers training facility in Tarrytown, NY.

The organization gave Jones the option to attend the camp, and he felt this would help him prepare for theta’s training camp, which begins on Wednesday, Sept. 21. When the opportunity arose for him to get some time on the ice, he jumped to the chance.

Jones played 50 games in the AHL for the Hartford Wolf Pack, and though disappointed that he was sent down prior to the start of last season, he believes his time there helped to improve his overall game and prepared him to make the jump to the NHL this year.

I was really disappointed I got sent down the beginning of the year, but I really I was really happy with me being down in Hartford last year. I got to play a lot. I got to really develop I really got to learn the pro game. So I think that me being down in Hartford last year for those 50 games was huge for me and my development.

Jones gained 10 pounds over the summer, which he felt was crucial for him to play a physical game at the NHL level. He felt he was pushed around a lot and addressed that situation over the summer. He worked on his strength and went to the gym as often as he could to improve on that part of his game. Now he is at 180 pounds and feels he is more fit to compete with the bigger players he will face during the season.

Jones believes there is an opportunity to make the roster and looks forward to a “healthy competition between a bunch of guys.”

Jones and his “Rookie Team” will play a game on Friday and on Saturday in Philadelphia against the Flyers rookie team. He has the right mindset to make the team and is showing that effort needed to be playing on opening night next month at Madison Square Garden.