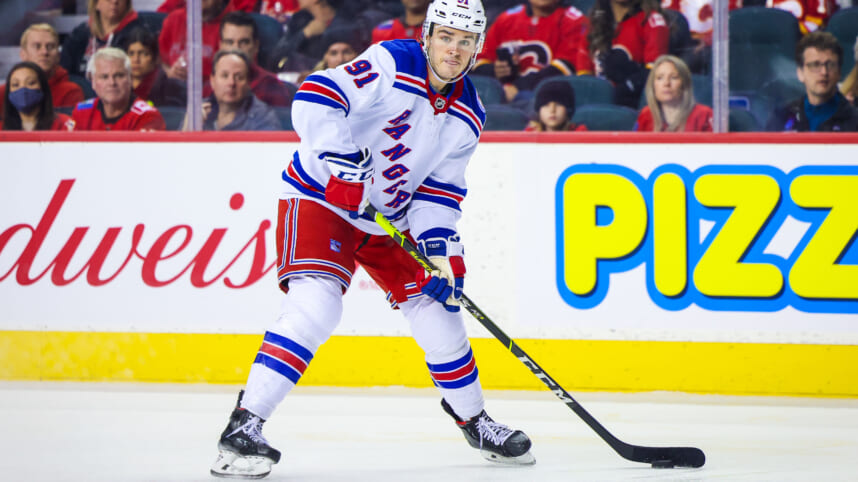 The New York Rangers begin a four-game homestand on Monday night when they take on the Anaheim Ducks at Madison Square Garden.

The New York Rangers look to bounce back from their 4-1 loss to the Winnipeg Jets as they host the Anaheim Ducks on Monday night at the Garden. The Ducks look to rebound after a bad 7-1 loss to the New York Islanders on Saturday at UBS Arena.

The Blueshirts did not have a morning skate on Monday, but based on Sunday’s practice, Sammy Blais should make his season debut for the Rangers. Blais suffered an upper-body injury in the team’s last preseason game against the Islanders.

Vatrano was acquired by New York near the trade deadline last March and turned in eight goals and five assists for 13 points in 22 regular season games. In the playoffs, Vatrano matched that point total with five goals and eight assists in 20 games.

-In three games, nine players have scored a goal, 11 have notched an assist, and 14 skaters have recorded at least one point.

-The Rangers return home for a four-game homestand and their second home game of the season. In the home opener against Tampa Bay, the Blueshirts earned a 3-1 victory in front of a sellout crowd. Last season, the Rangers went 27-10-4 for 58 points at home. In the NHL, they ranked tied for seventh in home wins and home points.

-Artemi Panarin has points in all three games this season (1G-5A), including a four-point outing against Minnesota on October 13. The last Rangers skaters before Panarin to record five-plus assists through the team’s first three games of a season were Mark Messier and Brian Leetch in 1992-93. With an assist tonight, he would have the most by a Ranger through four games since Jaromir Jagr (6) in 2006-07. The club record is eight. (via NYR Stats)