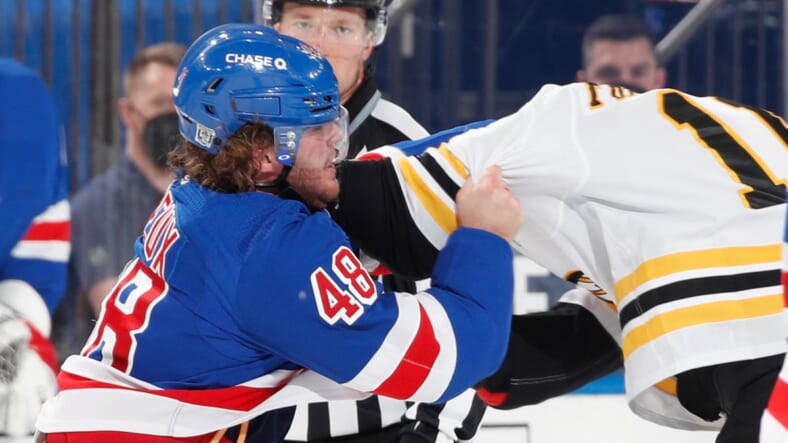 The New York Ranger's Brendan Lemieux mixes things up with the Boston Bruin's Trent Frederic from a game on February 10, 2021. Photo by Jared Silber/NHLI via Getty Images

The New York Rangers have announced that have acquired a fourth-round pick in the 2021 NHL Entry Draft from the Los Angeles Kings in exchange for forward Brendan Lemieux.

Lemieux skated in a bottom-six role with the Rangers, generating seven points, 65 hits, and 59 PIM across 31 games. The 25-year-old likely will play a similar role with the Kings. He may need to quarantine once he arrives in Los Angeles.

Lemieux was drafted by the Buffalo Sabres at 31st overall (1st pick of 2nd round) of the 2014 NHL Entry Draft. He had previously played for the Winnipeg Jets as well as the Rangers.

He was acquired by the Rangers in a deal at the trade deadline, along with a 2019 first-round pick and a conditional fourth-round pick, in exchange for Kevin Hayes on February 25, 2019.