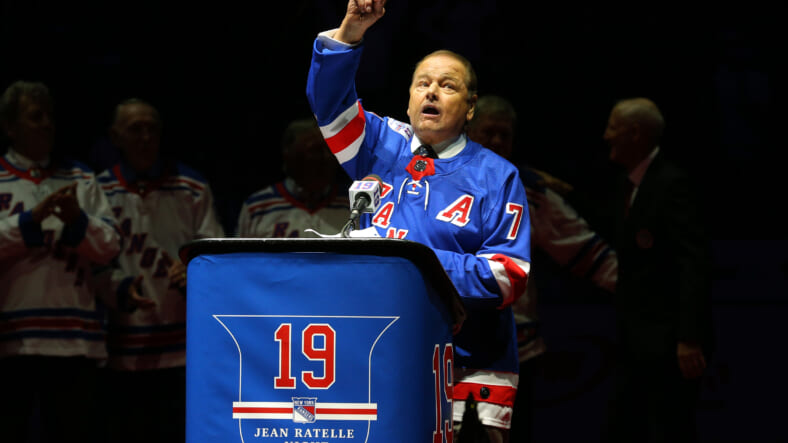 The New York Rangers will honor Hockey Hall of Fame member Rod Gilbert for the upcoming 2021-2022 season and beyond.

The New York Rangers will deservingly honor Rod Gilbert throughout the upcoming season and for years to come as they announced three touching tributes to Mr. Hockey on Thursday.

For the Rangers home opener this season, both the date and opponent have a significant connection to Gilbertâ€™s career. October 14, 2021 marks the 42-year anniversary of when Gilbert became the first Rangers player ever to have his jersey number retired (October 14, 1979). And on March 9, 1977, Gilbert was honored by the Rangers as an active player with â€œRod Gilbert Nightâ€ â€“ and the Blueshirtsâ€™ opponent was the Minnesota North Stars. Gilbert scored a goal and tallied an assist in that game, which was a 6-4 Rangers win.

During pre-game warmups on October 14, Rangers players will wear the white warm-up jerseys traditionally worn in the 60â€™s and 70â€™s, emblazoned with â€œGilbertâ€ and No. 7 on the back. Each player will sign their jersey, which will then be auctioned to support the Garden of Dreams Foundation, a non-profit organization that brings life-changing opportunities to young people in need. Rod was a long-time supporter of this charitable organization, devoting endless energy to its efforts, including as a board member. In addition to this, several elements of the Rangersâ€™ pre-game ceremonies will recognize Rodâ€™s career achievements and include members of the Gilbert family.

Throughout the entire 2021-22 season, Rangers jerseys will feature Gilbertâ€™s No. 7 patch.

The Rangers have created the Rod Gilbert â€œMr. Rangerâ€ Award, which will be presented annually, beginning with the 2021-22 season. The award will recognize the Rangers player â€œwho best honors Rodâ€™s legacy by exemplifying leadership qualities both on and off the ice, and making a significant humanitarian contribution to his community.â€ This is the first time the Rangers have created an award since 1988, when the organization introduced the Steven McDonald Extra Effort Award and the Lars-Erik Sjoberg Award.

Gilbert was a fixture at Rangers hockey games. Â He could be seen walking the stands during warmups greeting fans. He did many things for the organization to help promote the game and his beloved New York Rangers.

His absence this season and in years to come will be disheartening, but his spirit will be with the fans forever.