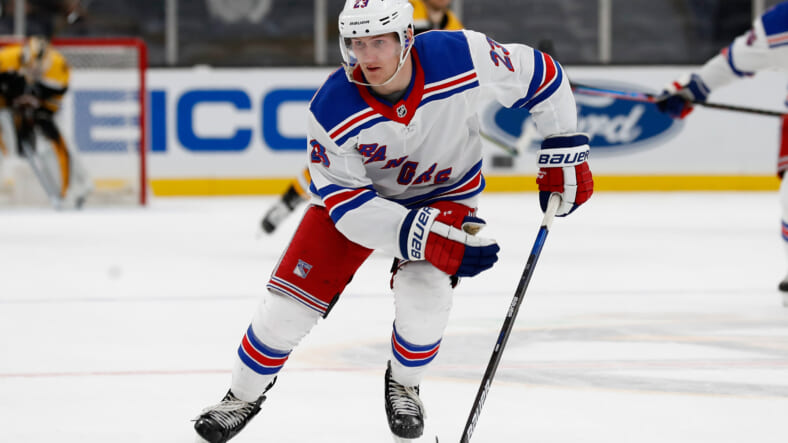 The New York Rangers’ trip through the Pacific Northwest got off to a good start through a Halloween triumph over Seattle.

Star of the Week: Adam Fox

Is it possible that Adam Fox is the best quarterback in New York? Mike White’s breakout performance at MetLife Stadium could cause some debate, but the defending hoister of the Norris Trophy has set up prime opportunities for his teammates. Fox had assists on each of the Rangers’ final three goals on Friday against Columbus, earning the primary helps on two of them. Fox also earned his second goal of the season on Sunday in Seattle, the sixth game-winner of his career.

In the midst of a seven-game homestand, the Canucks (3-5-1) are coming off three straight one-goal losses in regulation, the most recent being a 2-1 defeat at the hands of the Edmonton Oilers on Saturday. Meeting up with Vancouver sets up a reunion with former first-round representative J.T. Miller, who’s tied for third in the NHL with eight assists.

The Oilers (6-1-0) have gotten off to a scorching hot start through familiar methods: scoring efforts from Connor McDavis and Leon Draisaitl, who have united for 29 points in the early going. They’ve been fed well by Ryan Nugent-Hopkins, who leads the NHL with 10 assists in the early going. The Rangers’ last visit to Edmonton was a wild get-together on New Year’s Eve 2019, as they nearly fought back from a 6-0 deficit through five consecutive goals before falling 7-5.

The Rangers have an instant opportunity to avenge last Monday’s listless 5-1 defeat at the hands of the Flames (6-1-1). They weren’t the only ones stymied by Calgary, who finished a dominant east coast swing with five straight wins before shutting out Philadelphia in Alberta on Saturday night. The Blueshirts’ visit is the penultimate game of a five-game homestand at Scotiabank Saddledome, as Nashville and Dallas will respectively stop by on Tuesday and Thursday. This will be the Rangers’ first back-to-back since they followed up an opening night loss in Washington with an overtime defeat at home against Dallas on Oct. 13-14.

â€œItâ€™s repetitive when we talk about it. We can sing his praises for days, but he keeps us in every game and you never feel like youâ€™re out. Itâ€™s a tie game and he keeps it that way, and obviously, we get one. I canâ€™t say enough good things about him…We donâ€™t want to rely on him that heavy most games, but when we need him, he comes through. No one wants to have their goaltender bail them out most games.â€-Adam Fox on Igor Shesterkin (via Joe Pantorno)