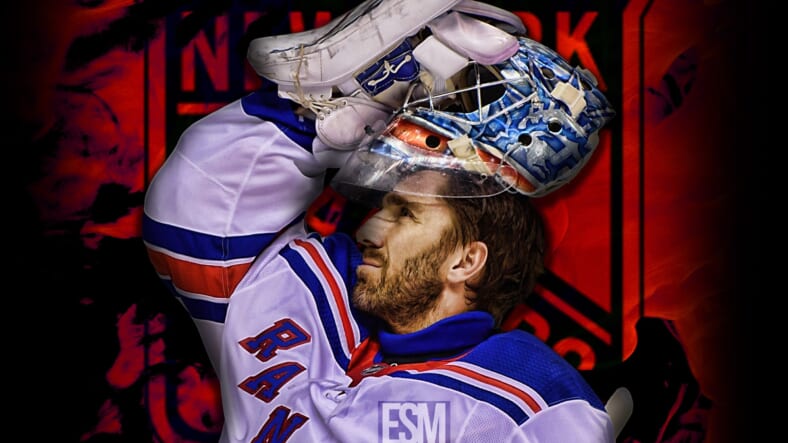 The writing was on the wall for Henrik LundqvistÂ and a potential buyout. It became official when the New York Rangers announced that they have bought out the final year of his contract on Wednesday.

Team president John Davidson Â had this to say of Â Hank whe n the buyout was announced to the hockey world,

â€œWe would like to thank Henrik for his immeasurable contributions to the New York Rangers,â€ Rangers President and Alternate Governor John Davidson said. â€œFrom the time I met Henrik when he first came to New York in 2005, he has been the consummate professional. His tireless work ethic, passion for the game, and love of the Rangers and New York City enabled him to become one of the greatest goaltenders in hockey and one of the best players in the history of our franchise. We all wish Henrik and his family the best going forward.â€

In an unceremonious fashion, the face of the franchise for the past 15 years will no longer don a Rangers sweater. Though this was no surprise, the reality of the situation is extremely surreal.

Henrik deserved a better farewell, but it was not meant to be with the emergence of Igor Shestrkin this past season and an $8.5 million salary-cap hit the club was unwilling to pay him as his status changed from starting goaltender to backup. He only started one of the team’s final 19 games of the season.

Lundqvist was drafted in theÂ 7th round (205thÂ overall) of the 2000 NHL Entry Draft while he was playing for Frolunda in the Swedish Junior League. He made his NHL debut onÂ Oct. 8, 2005, in an overtime loss to the New Jersey Devils. He recorded his first NHL win five days later against the same Devils team. The King recorded his first shutout onÂ Oct. 17, 2005, making 23 saves in a 4-0 victory against the Florida Panthers.

Hank finished his first season with 30 wins, setting a Rangers rookie record, he wasÂ fourth in the league with a .922 save percentage and fifth in goals against (2.24).

In 2013-’14 Hank lead the team to the Stanley Cup Finals. The Blueshirts lost that series to the Los Angelos Kings as it was his only Cup Final appearance.

The Are,Â Sweden native was a Vezina Trophy Finalist in each of his first three seasons and finally took home the hardware as the league’s best goalie in the 2011-’12 season recording a 39-18-5 record with a .930 save percentage and a 1.97 goals-against average. he has eight shutouts that year.

There are few players who have an impact not only in the locker room and on the ice, but also in the community.

The Henrik Lundqvist Foundation was founded in 2014 by NY Rangersâ€™ goaltender Henrik Lundqvist and his wife Therese. After years of service through Madison Square Gardenâ€™s Garden of Dreams Foundation, including serving as a spokesperson since 2009, Henrik decided to create his own Foundation which runs its own HLF Young Ambassador Program but also partners with a few carefully selected community partners in New York City, Sweden and the Dominican Republic.

In 2015, HLF launched its first Foundation-run program, the Henrik Lundqvist Foundation Young Ambassador Program. The program was started because of Henrik & Thereseâ€™s belief in the incredible power of young people to make a difference in the world.

So many times there is a player who fans expect so much from, sometimes the expectations are unachievable, but Lundqvist always strived to reach every one of them. He incredible focus and work ethic was second to none despite playing in one of the largest NHL markets.

Henrik is a sure-fire Hall Of Famer, as he holds many NHL and Rangers records that fans will appreciate more now that he is no longer a member of the Blueshirts.

Though writers are supposed to be impartial, I have had trouble doing this while writing this story. The fan in me took over the writer in me the more this story unfolded.

His stats, as impressive as they are, are only one part of the player. New York can be a very tough and intimidating place to play. Under the lights at the world’s most famous arena made that job so much harder, yet the one thing running through my mind as I conclude this story are the fans celebrating his wins.

Hank took a moment to thank the organization. It was with the same class and poise he has shown throughout his time in New York.

Representing this organization has been the biggest source of pride and joy in my life. I’m so grateful for the opportunity, for the friendships and for all the great memories created wearing the red, white and blue.
I will always cherish my time as a Ranger.

Seeing Hank punch is glove had into the air after a big win, celebrating overtime victories in huge playoff games, and enjoying seeing him win game four of the Stanley Cup Finals in 2014 Â in are the memories I will cherish forever.