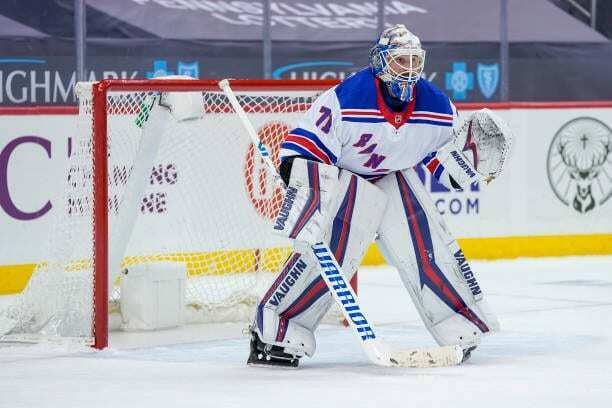 It was probably not what the New York Rangers were thinking when they signed Keith Kinkaid. When the Rangers signed the 31-year-old Long Island native in October, they thought was that he would be there just in case something happened COVID-wise to Igor Shesterkin and Alexandar Georgiev. However, that “something” turned into a Shesterkin injury, and Georgiev being very shaky of late.

He was not exactly unknown to the Rangers and head coach David Quinn. “I knew him way back to his Union [College] days and coached him in the World Championships [in 2016], so Iâ€™m pretty familiar with him,â€™â€™ Quinn said post-game after Kinkaid came in against the Penguins on March 7. “Iâ€™ve always thought him to be a good goalie.â€™â€™

Kinkaid played for Union College from 2009â€“2011. In his freshman season, he was named to the ECAC All-Rookie Team and Third Team. Kinkaid had an outstanding sophomore season in which he posted a 25-10-3 record and led the Dutchmen to their first NCAA tournament appearance and was named an AHCA East First-Team All-American. He was also named to the All-ECAC Hockey First Team. He was awarded the Ken Dryden Award as the best goaltender in the ECAC. Kinkaid signed an entry-level contract with the Devils in April 2011 after his sophomore season with Union.

After a couple of seasons with New Jersey, he bounced around a bit in the NHL. Last season he spent some time with the Montreal Canadiens. However, he did not play well in Montreal and was sent down to finish the season in the AHL.

The Rangers then signed him in October as some COVID-19 insurance. With the Shersterkin injury and Georgiev not playing well, Kinkaid got his chance to play on March 7 when he came in for Georgiev.

The veteran netminder has been solid for a team that needed some consistency in net. He is 3-0-1 in his last four starts, but since shutting out the Bruins on March 13 he has just a so-so 2.95 GAA and .885 save percentage.

You heard it here first from @VallysView

Keith Kinkaid:" Save of the YEAR" pic.twitter.com/4HObvrQokV

The New York Rangers gained another benefit from signing Kinkaid.

When the Rangers signed Kinkaid, they inked him to a two-year deal. This allowed them to have a goaltender they could potentially expose for this summerâ€™s Seattle Kraken expansion draft.Â

According to the NHL, teams must make available one goalie who is under contract in 2021-22. A player could also be a restricted free agent at the end of his current contract immediately prior to 2021-22. If a team elects to make a restricted free agent goalie available, this will meet a requirement the goalie must have received his qualifying offer prior to the submission of the team’s protected list.

While it is likely that Kinkaid will be made available, his good play the rest of the seasons would at least give them options in case something happens to Georgiev. Shesterkin is ineligible for selection as first and second-year players are exempt from selection.

While Kinkaid waited patiently for his chance to show he can still play the NHL, he gave credit to Rangers goalie coach Benoit Allaire for helping him rebuild his confidence and his game after that rough 2019-20 season.

“I’ve been hoping for a break,â€™â€™ Kinkaid said post-game after his first Rangers start on March 9. “I plan on taking absolute control of this opportunity. And to prove I still belong in this league.â€™â€™

Thankfully for the New York Rangers, he has done just that.