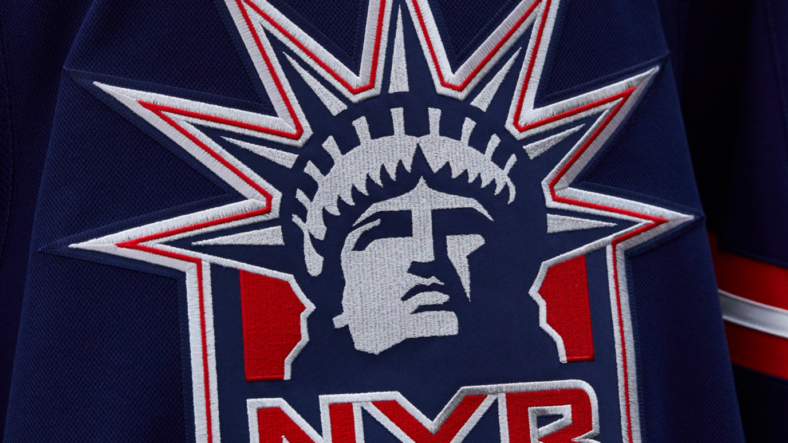 The NHL and Adidas revealed their Reverse Retro hockey sweaters on Monday, unfortunately for the New York Rangers fans,Â the hype was bigger than the actual jersey.

The unveiling turned out to be the worse kept secret with the Liberty sweater making its return to Broadway, 24 years after its initial appearance, in a dull and boring fashion.

The Liberty logo appears to be the same logo from the sweaters Mark Messier and Wayne Gretzky wore the last time they were around, the Statue of Liberty face with NYR under it.

The logo is on a plain blue jersey with red and white stripes on the mid-arm. The numbers on the jersey are white with red over it trimmed in black and offers the jersey a little pop to it, but overall is quite disappointing.

In comparison, the 1996 version of this sweater had some color to it. The v-neck collar was grey, white, and red along with the mid-arm stripes. Â The sleeves from the mid-arm down were in red.

I was never a fan of the Liberty sweater, but Adidas and the NHL could have done something to make the jersey better than what it was put out on Monday. Â This jersey is more of a “return” than a retro reverse.

10 years ago today, we introduced these beauties. ? pic.twitter.com/YcKYlmuUL6

Personally, I would have preferred a similar version of the team Heritage jersey as opposed to the Liberty version, but hockey is a business first. In the current pandemic era, the NHL, Adidas, and each of the 31 clubs are looking to do whatever they can to get some sought of revenue back.

Following the announcement, some of the Rangers players let the fans know how excited they were to wear the new sweater when the season begins early next year.

The Blueshirts have played three games since the end of March so at this point, it’s safe to say what the players are wearing is less important than when they get back on the ice and actually wear those sweaters.