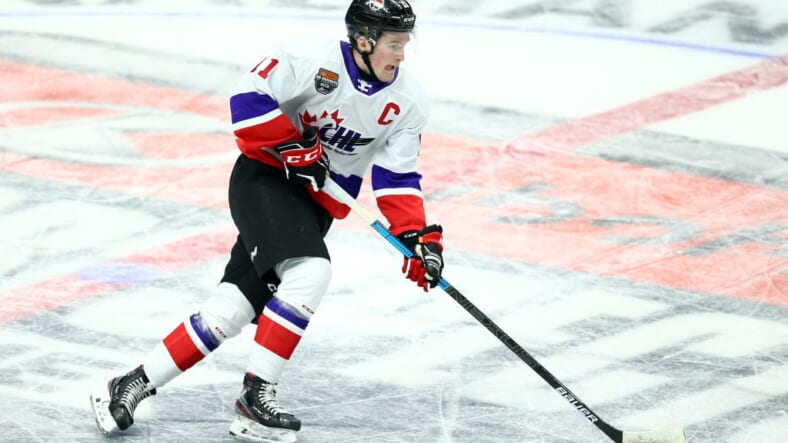 The New York Rangers are playing things close to the vest when it comes to who they will select with the first overall pick in this year’s NHL Entry Draft being held virtually on Tuesday night.

General manager Jeff Gorton knows who the top prospect is and its value to the club for years to come. Yet, that has not stopped him from listening to any and every offer that has come across his desk.

“I’ve taken calls on it, that’s the job,” Gorton said. “We’ll listen to anything, but we’re comfortable picking first overall. … We look forward to Tuesday. I’ll always take the calls, but I would say our eye is on taking the pick right now.”

The Rangers are “really impressed” with Lafreniere, Gorton said to Dan Rosen of NHL.com.

The presumed number one pick overall is a name Rangers fans have heard since that ping-pong ball with the Rangers logo was selected several weeks ago. Alexis Lafreniere, theÂ Rimouski forward, will be the team’s first overall selection since 1965 when the Blueshirts selected Andre Veilleux with the top pick in the 1965 NHL Draft. He never played a game in the NHL.

Lafreniere stands on the top of the mountainÂ in NHL Central Scouting’s final ranking of North American skaters. He led the Quebec Major Junior Hockey League with 112 points (35 goals, 77 assists) in 52 games and was named the Canadian Hockey League Player of the Year.

Despite how convinced most people are that the Rangers will take Lafreniere first overall, Gorton has continued to have a little fun with those who continue to ask him about the pick,

“On the first pick, tune in at 7 o’clock Tuesday and we’ll tell you exactly what we’re going to do,” Rangers general manager Jeff Gorton said Friday.

Once the draft is completed and Lafreniere is officially a Blueshirt, where he will fit in on the roster will be the next situation the club will deal with. The club has a pretty good player playing left wing on the first line named Artemi Panarin, a Hart Trophy finalist this season. Then there is Chris Kreider who signed a contract extension last February.

Let’s not forget about last year’s second overall pick, Kaapo Kakko, who should be ready for a top-six spot when the 2020-2021 season begins.

These are great problems to have to worry about, but first, the team needs to secure the best player in this year’s draft.

Tuesday night will be an exciting one for Rangerstown. Â  The hair on fans skin across the city will rise when Gary Bettman virtually begins the best words to start an NHL Draft,

“With the first pick in the 2020 NHL Draft, the New York Rangers select Alexis Lafreniere, Rimouski of the QMJHL.” What a great night it will be for Rangers hockey.