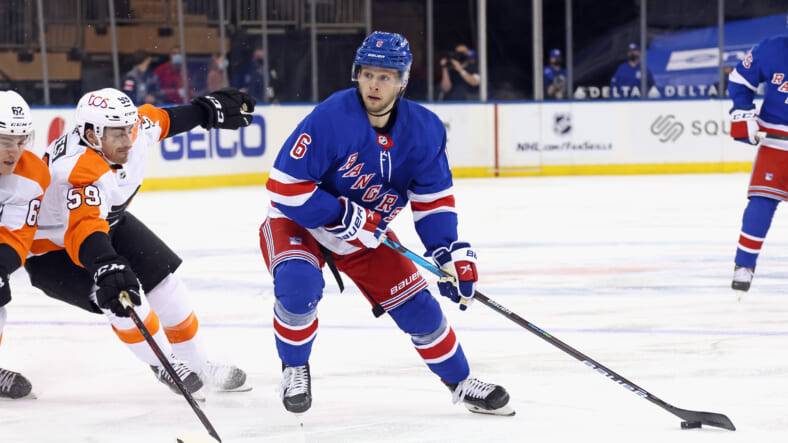 The New York Rangers have recalled six players to be used on their Taxi Squad in accordance with the new agreement between the NHL and NHLPA.

The New York Rangers have recalled six players to be on the Taxi Squad as the team resumes their NHL schedule with a contest in Florida on Wednesday night.

UPDATE: #NYR have recalled the following players to the taxi squad:

Morgan Barron,  Jonny Brodzinski, Tim Gettinger,  Zac Jones, Matthew Robertson, and  Adam Huska will join the team for practices but will have to be officially recalled if and when the club decides to put them in the lineup.

The NHL and NHLPA agreed to have Taxi Squads during the league’s recent pause. The NHL returns to play following a week off to help combat the COVID situation.

Taxi squads will be used through the team’s last game before the 2022 NHL All-Star break. Maximum of 6six players per taxi squad, all subject to waiver requirements where applicable. Nobody can spend more than 20 days on the taxi squad during this temporary period.

The Rangers had recalled goaltender Keith Kinkaid on Monday to back up Igor Shesterkin with Alexandar Georgiev in Covid Protocol.  It’s expected that Huska will be sent back down and replaced by Kinkaid on the Taxi Squad once Georgiev retunes from COVID Protocol.