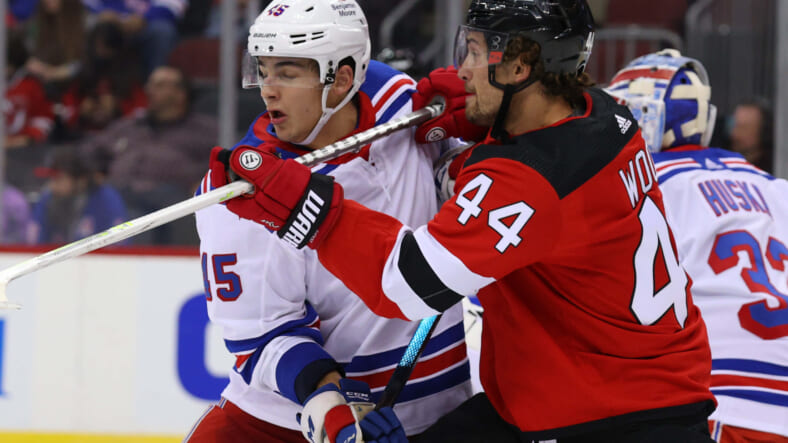 The New York Rangers announced today that they have recalled defenseman Braden Schneider from the Hartford Wolfpack. He has been appointed to the main roster immediately, bypassing the taxi squad. Also, in the announcement is that the Rangers have reassigned defensemen Nils Lundkvist and Tarmo Reunanen as well as goaltender Tyler Wall to Hartford.

OFFICIAL: #NYR have recalled defenseman Braden Schneider from @WolfPackAHL and promoted him to the active roster. Defensemen Nils Lundkvist and Tarmo Reunanen as well as goaltender Tyler Wall have been re-assigned to Hartford.

Schneider was drafted 19th overall in the 2020 NHL entry draft. The Rangers were so high on him that they traded a 1st and 3rd in that draft to Calgary so they could grab him.

While he only has 9 assists in 24 games for Hartford, Schneider isn’t paid to score. The 6’2″, 210lb 20 year old from Prince Albert, Saskatchewan, was drafted as a hard-nosed stay-at-home defenseman. But in the AHL, he has shown flashes of quick outlet passes and agile skating.

As long as Covid doesn’t change things, Braden Schneider should be able to get into Thursday’s game against the Sharks at the SAP Center in San Jose. Because the Rangers’ top 4 defensemen is set with Lindgren-Fox and Miller-Trouba, look for him to slot into the 3rd pairing with Patrick Nemeth. This would end up being the 5th Defenseman that Nemeth has been paired with this year. Previously he has been with Tinordi, Jones, Lundkvist, and Hajek. None of them have been very impressive.

With Lundkvist, Reunanen, and Wall being sent down, it’s still to be seen what the goal in all of these moves is. Are the Rangers showcasing their young players as potential trade chips at the deadline? Are they using the multitude of Covid absences to gauge the NHL readiness of many young prospects? Is it all of the above?