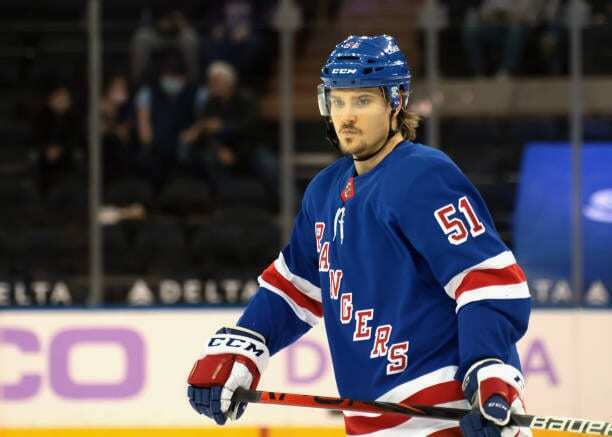 Thursday night’s shutout loss to the Islanders has left the New York Rangers a very small chance to make the playoffs. Given that, it appears that the Blueshirts are going to start taking a look at some of their younger talent. Today, the New York Rangers announced that they had recalled forward Morgan Barron and defenseman Tarmo Reunanen from the Hartford Wolf Pack.

The 22-year-old Barron has skated in 21 games with the Wolf Pack this season. He registered 10 goals and 11 assists for 21 points, along with a plus-eight rating and 20 penalty minutes. He has recorded a point in 17 of Hartford’s 21 games in 2020-21, including a goal in nine of those contests. Barron is tied for third among AHL rookies in goals and is tied for sixth among AHL rookies in points this season. In addition, he is tied for second in the AHL in power-play goals (six) in 2020-21. Barron leads Hartford in goals, points, shots on goal, and plus/minus rating this season.

Barron played three seasons at Cornell University before beginning his professional career this season. Barron was named a First Team All-American and was one of 10 finalists for the Hobey Baker Award in 2019-20. He recorded 32 points and a plus-17 rating in 29 games as a junior.

Reunanen skated in one game with the Rangers this season. He registered his first NHL assist/point while making his NHL debut with the Blueshirts on Mar. 15 vs. Philadelphia.

The 23-year-old defenseman has skated in 21 AHL games with Hartford this season. He has registered four goals and 13 assists for 17 points. He leads the Wolf Pack in assists and is tied for second on the team in points in 2020-21. His 17 points are also the most among Hartford defensemen. Reunanen is tied for third among AHL defensemen in points and is tied for fifth among AHL defensemen in assists this season. He has tallied a point in eight of the last 11 games, and he has recorded 12 points over the span.