New York Rangers pick up an Important Victory over the Islanders 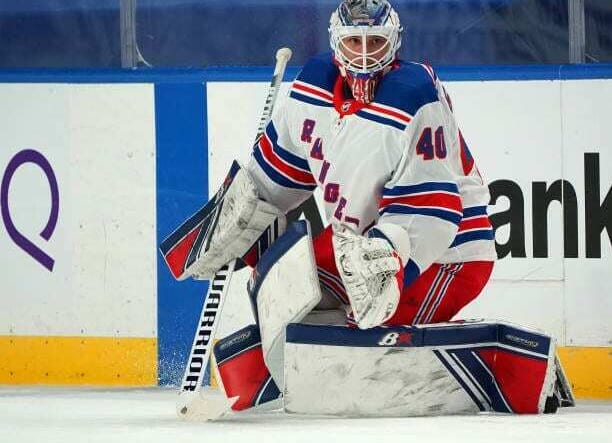 BUFFALO, NY - JANUARY 26: Alexandar Georgiev #40 of the New York Rangers before the game against the Buffalo Sabres at KeyBank Center on January 26 , 2021 in Buffalo, New York. (Photo by Kevin Hoffman/Getty Images)

After a difficult loss on Thursday night, the New York Rangers rebounded to defeat the New York Islanders by a score of 4-1. Alexandar Georgiev was outstanding in goal after not seeing action for the last 11 games.

Alexis Lafreniere opened the scoring for the Rangers by scoring at 6:05 of the first period.

Colin Blackwell scored the second goal for the Rangers, extending his goal streak to three games, which is a new career-high. He ranks third on the Rangers in even-strength goals this season with nine.

K’Andre Miller scored the third goal for the Rangers as Mika Zibanejad added an empty-net goal to finish up the Blueshirts scoring. Miller now leads all rookie defenders in scoring.

Artemi Panarin had two assists on the night. He has 93 career assists, passing Mark Messier for the most assists by a player within his first 100 games with the franchise.

Georgiev was a big factor in the New York Rangers win.

The young Russian made 31 saves on the game, only giving up an Andy Greene goal in the second period. Georgiev hadn’t started a game since March 19.

“I haven’t played for a while,” Georgiev said in his post-game Zoom conference. “But I felt comfortable coming into it. I just did my job, the same as I usually do. It felt like kind of like a playoff game and it was really fun to take part in it.”

Georgiev gave credit to Ranger’s goaltending coach Benoit Allaire for keeping him ready while he waited to get his turn in goal. “Every practice I would come out early and spend with Benny,” Georgiev said. “A lot was more mental, trying to be better every day. Tried to take it one day at a time to make my game better.”

Head coach David Quinn was very pleased with his goaltender’s performance. “I liked a lot about his game tonight. I thought Georgie was sharp, as he usually is against the Islanders. It is not easy to sit as long as he has and come out and play the way that he did.”

The New York Rangers will face their cross-town rival again on Sunday afternoon.