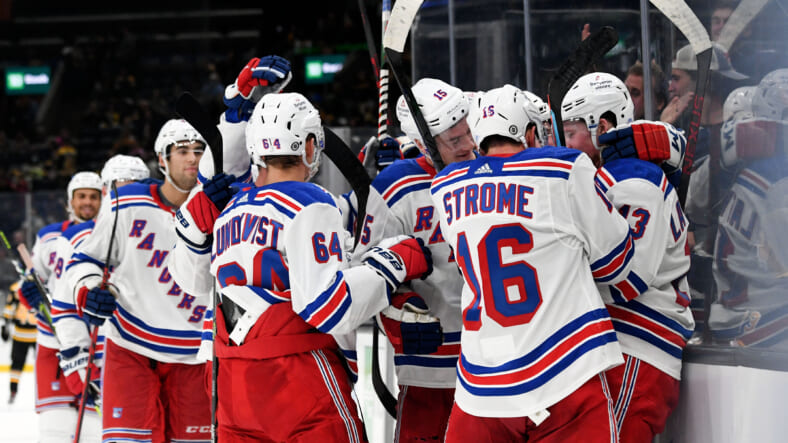 The New York Rangers training camp is entering its last week and head coach Gerard Gallant still has some tough decisions to make to get his roster to 23 players.

The New York Rangers split their two games this weekend. Â On Friday night the team was embarrassed in a 7-1 loss in New Jersey against the Devils. The Blueshirts rebounded the following night in Boston as they won that contest 4-3 in overtime.

The coaching staff along with general manager Chris Drury has been hard at work putting the pieces together they feel will bring the best results when the season begins in just 10 days.

Prior to Friday’s game against the Devils, the club announced that following being placed on waiversÂ Anthony Greco, Jonny Brodzinski, Ty Ronning, Tim Gettinger, Anthony Bitetto, and Keith Kinkaid to the Hartford Wolf Pack of the American Hockey League (AHL).

Sunday saw more moves as the Rangers begin to see how their team will look for the final two preseason games this week.

OFFICIAL: #NYR have cut training camp roster down to 27 players as Will Cuylle has been assigned to the Windsor Spitfires, and Matthew Robertson, Braden Schneider, Lauri Pajuniemi, Tyler Wall and Adam Huska have been assigned to @WolfPackAHL.

The team cut its training camp roster down to 27 players as Will Cuylle has been assigned to his junior team, the Windsor Spitfires of the Ontario Hockey League (OHL), and Matthew Robertson, Braden Schneider, Lauri Pajuniemi, Tyler Wall, and Adam Huska have been assigned to the Hartford Wolf Pack of the American Hockey League (AHL).

The Rangers have 27 players remaining in Training Camp. The roster breakdown is listed below:

On Wednesday the Rangers will host the Devils at the Garden with a 7 p.m. faceoff. The preseason schedule concludes in Bridgeport, CT. where the team will play the Islanders.

Head coach Gallant still has not announced who the third defensive pairing will be or who the extra roster players will be once the season starts. Â That should become clearer this week as the Blueshirts work out the kinks and fine-tune the team to be ready for opening night on Oct.13 in Washington.