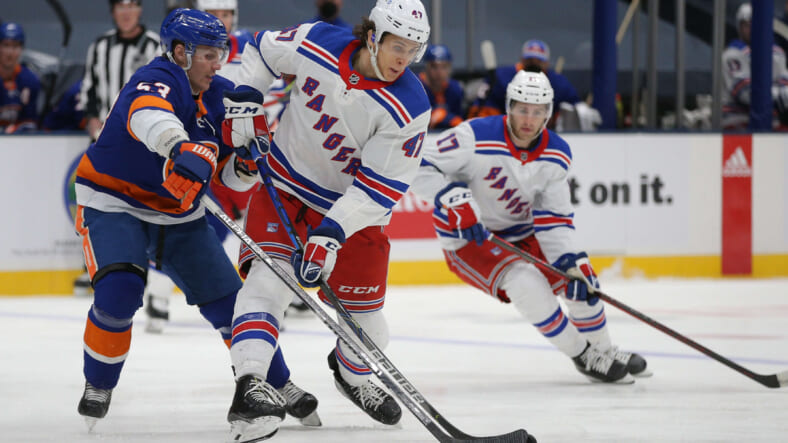 Barron, a sixth-round pick from the 2017 draft, is set to make his season debut when the New York Rangers visit Nashville tonight.

Reports from New York Rangers practice indicate that center/left winger Morgan Barron will make his 2021-22 season debut when the Blueshirts battle the Nashville Predators on Thursday night (8 p.m. ET, MSG). Barron’s presumed arrival stems from a report from Newsday’s Colin Stephenson, which indicated that Julian Gauthier, Libor Hajek, and Jarred Tinordi were set to be the team’s healthy scratches.

Barron was the Rangers’ sixth-round pick in the 2017 draft (174th overall), chosen through a pick acquired from San Jose. He made his NHL debut through five games with the team last season, earning his first Ranger goal on May 5 against Washington after earning 21 points in 21 games with AHL Hartford. Barron added two further goals in a pair of games with the Wolf Pack this year including the game-winner in last Friday’s season-opening win over Bridgeport.

A Nova Scotia native and Cornell alum, Barron was called up after Kaapo Kakko left last Saturday’s win over Montreal with an upper-body injury. Kakko has since been placed on injured reserve while the Rangers (2-1-1) are also missing Ryan Strome, who remains in COVID-19 protocol.

Barron has earned praise for his leadership abilities, which were prominently displayed as a captain at both Cornell and St. Andrew’s College in Ontario. He’ll likely appear on the Rangers’ fourth line as on the left wing alongside Ryan Reaves and centered by Greg McKegg.

In other roster news, Igor Shesterkin is expected to make his fourth consecutive start after missing last week’s season opener, per USA Today’s Vince Z. Mercogliano. Shesterkin made 40 saves in Monday’s 2-1 overtime win in Toronto and will be making his first career start against Nashville (1-2-0).