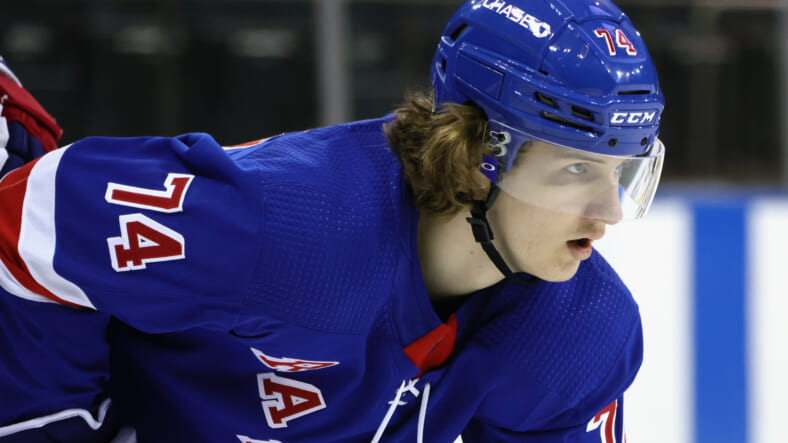 New York Rangers GM and President Chris Drury announced on Wednesday afternoon the club has loaned Vitali Kravtsov to Traktor of the KHL.

Disgruntled New York Rangers forward Vitali Kravtsov has been loaned to Traktor of the KHL.

â€œAfter discussions with Vitali and his representation, we decided a loan to Traktor was in the best interests of both him and the organization,â€ said Drury. â€œWe think very highly of Vitali and the Rangers development staff will continue to work with him to reach our mutual goal of him someday being a New York Ranger.â€

Kravtsov refused to report to the AHL Hartford Wolf Pack after he didnâ€™t make the team’s lineup out of training camp. Â Instead, he left for Russia and was willing to wait for a trade away from New York.

The 21-year-old appeared in 20 games for the Blueshirts last season scoring two goals with four points.

The Rangers will be able to recall Kravtsov, should they decide to, once the current KHL season has concluded.

Kravtsov made issued a statement via the Rangers PR department which read,

â€œI want to thank the Rangers for working with me, and appreciate the open and honest conversations we have had during this process,â€ said Kravtsov. â€œWhile this has been a challenging time for me personally, I believe having the opportunity to return to Traktor and work on my game is the best thing for me right now. My main focus is getting better every day to continue towards my goal of playing hockey for the New York Rangers.â€

Kravtsov was selected by the Rangers in the first round (ninth overall) of the 2018 NHL Draft.