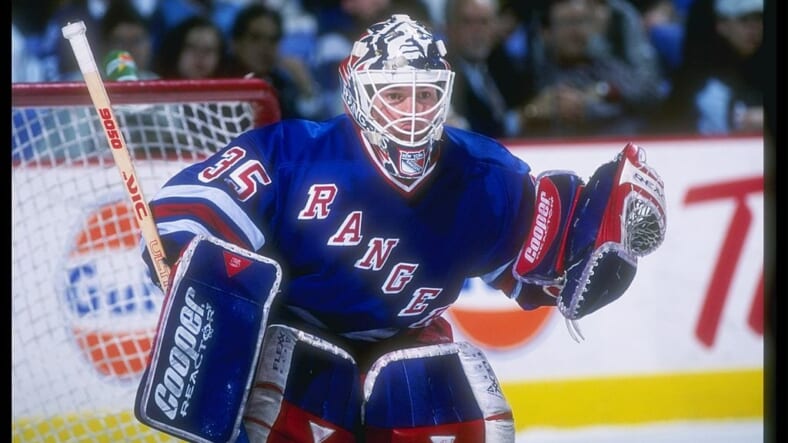 13 Dec 1996: Goaltender Mike Richter of the New York Rangers looks on during a game against the Buffalo Sabres at the Marine Midland Arena in Buffalo, New York. The Rangers won the game, 3-0.

As part of “Goalie Week”,Â Madison Square Garden Network will have a roundtable discussion hosted by Steve Valiquette. Richter and J.D. will share some of the fondest memories of their time wearing the famous Rangers sweater. From NHL debuts and rookie seasons, players they looked up to growing up, staying connected to others during this pause, and more.

Davidson talked about the time when he was traded to the Rangers in June 1975.

â€œMy second year I played so well that I got traded to the Rangers after the season. And that was the best thing that happened to me. Aside from my family, that was the best thing that ever happened to me. I was blown away when I got to New York. I had never seen anything like this. Madison Square Garden, New York City, the busy streets, oh baby. It was quite something.â€

Davidson was part of the great team that made it all the way to the Stanley Cup Finals in. 1979 where they lost the series to Ken Dryden and the Montreal Canadiens.

The president of the Blueshirts also talked about the current team and how he has been staying connected with the scouting staff and some of the prospects thanks to platforms look Zoom.

Stanley Cup Champion Mike Richter was asked about his NHL playoff debut during the 1989 playoffs.

“It was good to get the opportunity to play. Iâ€™m indebted to Phil Esposito who gave me it. I didnâ€™t expect that I was necessarily going to get in there. I didnâ€™t expect it. I was so thrilled and excited. I had so much energy.â€

Esposito was the Rangers General manager at the time but was fired following the team’s elimination for the playoffs in May 1989.

Richter also spoke of the players he looked up to in the NHL, namely Eddie Giacomin. Richters idol was the team’s goalie coach when he was called up to the Rangers.

Two of the last three goalies to reach the Stankey Cup Finals in the last 41 years (Henrik Lundqvist was the third) talk about the great memories playing for this original six franchise.