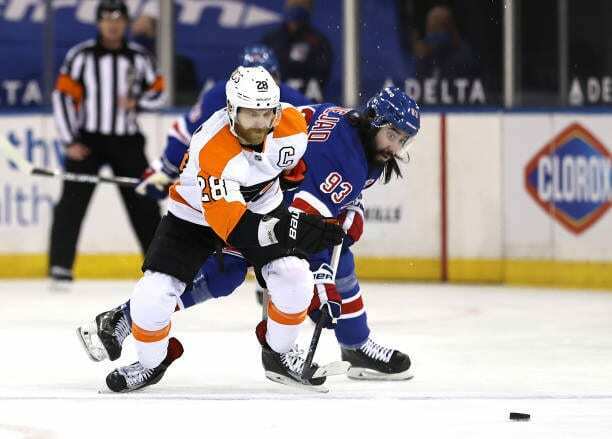 NEW YORK, NEW YORK - APRIL 22: Claude Giroux #28 of the Philadelphia Flyers tries to keep the puck from Mika Zibanejad #93 of the New York Rangers in the second period at Madison Square Garden on April 22, 2021 in New York City. (Photo by Elsa/Getty Images)

The New York Rangers kept their slim playoff hopes alive with a 4-1 victory of the Philadelphia Flyers on Friday night. They moved back to six points behind the Boston Bruins, thanks to a Buffalo Sabres victory of the Bruins.

Alexandar Georgiev stopped 26 shots and improved to 8-5-2 on the season. He has allowed two goals or fewer in five of seven career appearances against the Flyers, including one goal or fewer in four of those games.

Artemi Panarin had an assist on the Kreider goal, giving him his 100th career assist as a New York Ranger.

For Thursday night’s game, head coach David Quinn did some changing of the Blueshirts lines. One of the changes was to move Alexis Lafreniere up to the first line with Mika Zibanejad and Pavel Buchnevich. That line was very effective as each player on that line contributed two points in the victory.

Buchnevich put the Rangers ahead 2-1 at 7:56 with his 20th, assisted by Lafreniere and Zibanejad. Lafreniere made it 3-1 at 9:24 of the third for his ninth of the season. Buchnevich and Zibanejad assisted. Zibanejad has seven goals and 10 assists this season against the Flyers, including two six-point games.

Filip Chytil completed the scoring with his eighth at 13:40, with assists to Kaapo Kakko and Panarin.

“I’m just trying to learn every day at practice,” Lafreniere said in his post-game Zoom conference. “It’s fun to play with Mika and Buch and I just gotta learn from them and get better every day.”

“I thought we were a little more opportunistic,” Quinn said after the game. “I don’t think there was a big dip in our game, but the 5-on-3 kill was huge. That third goal really put us in a different mindset.”

The game was part of the “Garden of Dreams” night at MSG, a fundraising effort for that foundation. The Garden of Dreams Foundation is committed to helping children who are facing challenges such as homelessness, extreme poverty, illness, and foster care, and since it began in 2006.

The Rangers will play the Buffalo Sabres twice at MSG, on Sunday and Tuesday night.