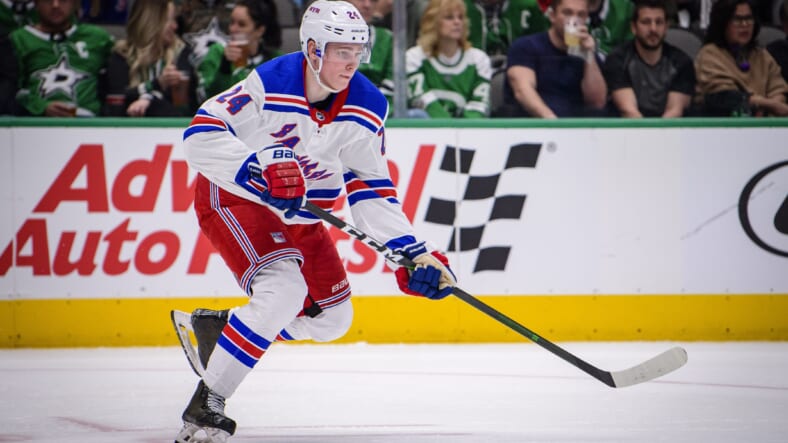 Kaapo appears to be on pace to partake in the New York Rangers’ return to action against Columbus on Friday night.

Optimism reigns when it comes to the return of Kaapo Kakko, who may be ready to go when the New York Rangers take the ice on Friday night against Columbus (7 p.m. ET, MSG).

Kakko has missed the last four games after suffering an upper-body injury during Oct. 16’s win in Montreal but it appears that the third-year Blueshirt is ready to end his medical sabbatical.

“I’m ready to play,” Kakko said of his status, per Mollie Walker of the New York Post. Though Kakko is ready to play, it may take Rangers head coach Gerard Gallant some convincing to put him in Friday’s lineup.

“Hopefully, pretty sure, but thatâ€™s not 100 percent,” Gallant said in another report from Walker. “We got through [Thursday], and the medical staff will let me know in the morning. It looks good.â€

Walker’s reports stated that Kakko has returned to the second even-strength line as a full participant in the last two practices, working alongside Artemi Panarin and Ryan Strome.

The Rangers (4-2-1) are returning to Madison Square Garden for a Friday night tilt against the divisional rival Blue Jackets (4-2-0) before embarking on a four-game road trip through the Pacific Northwest and Western Canada.

During his time away from the team, Kakko kept a close eye on the Rangers’ penalty kill, saying he “definitely learned something about it”. The Rangers killed off all but one of 12 penalties in Kakko’s absence after allowing goals on four of their first 11.

While the Rangers are hopeful about seeing Kakko on Friday, it’s likely they’ll be missing Ryan Reaves, who left Monday’s 5-1 loss to the Calgary Flames with a lower body injury. Reaves did not practice on Thursday, nor did Chris Kreider, though the latter was held out due to maintenance.