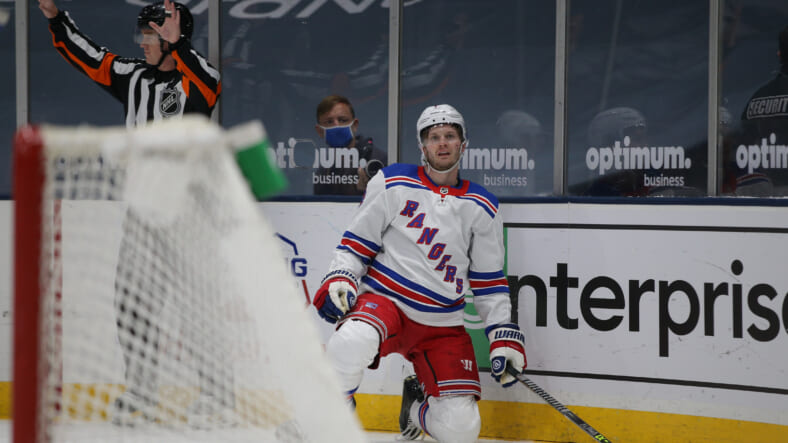 With the New York Rangers enjoying the view from atop of the Metro Division (4-1-1 9 PTS.), the team has seemed to form a bond, something that defenseman Jacob Trouba hinted was missing since he arrived in New York.

New York Post’s Mollie Walker Tweeted out some comments that were said by the nine-year veteran player on Sunday. The discussion appeared to begin about how the team defends one-goal leads, but his answer appeared to indicate some friction in the locker room during the season last year.

“I’d be lying if I said there wasn’t a different feel in that situation… We know what to do, it’s not really overthought and everybody knows their job. Do your job and we’ll be fine. That’s the kind of mentality we’ve taken.”

Trouba joined the Rangers for the start of the 2019-2020 season following a trade that sent defenseman Neal Pionk to the Winnipeg Jets in June 2019.

The 27-year-old had been rumored to be in contention to be named the next captain of the Blueshirts before the club decided to go with alternate captains prior to the start of this season.

Regardless of having the “C” on his uniform, Trouba has been a consistent leader on and off the ice.

Last season he has was credited with mentoring rookie defenseman K’Andre Miller. The two were paired for most of the season, under David Quinn, with Trouba guiding the rookie through a successful first season in the NHL.

“I think there’s a little bit more cohesiveness and the team’s a little bit tighter. Guys are comfortable being themselves more than they have been in the past, myself included.”

The comments here seem to indicate that there was, at the very least, some tension between the players and the head coach last season. It is hard to judge exactly what went on behind the scenes last year, but for now, things seem to be playing out much better for Trouba and his teammates this season.

This comfort level could just be a result of the Ranger’s four-game winning streak or a combination of team bonding and a different way Gerard Gallant deals with his players.