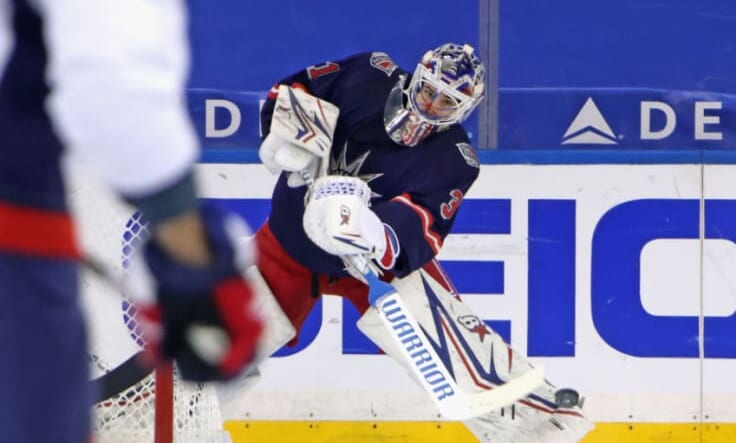 New York Rangers goaltender Igor Shesterkin got off to a very rough start in his 2021 campaign. His confidence was low, his outings were consistently poor, and the title of ‘starting goalie’ was non-existent. Shesterkin has rebounded nicely in recent games though, and the Rangers are playing their best hockey of the young season. Though it took longer than desired, he is playing like Broadway’s goalie of the future – and is only going to keep getting better.

How Igor Shesterkin is Finally Playing to His Potential:

Over his first four starts of the season, Igor Shesterkin was extremely underwhelming. His .894 save percentage and 2.73 GAA were close to the bottom in the NHL among qualified goalies. He looked lost, confused, and tremendously anxious. On top of his poor play, the coaching staff didn’t do much to help. He was swapped with teammate Alex Georgiev after each start start, lowering his self-confidence even more. Even after stopping .920% of shots against the Sabres in a 3-2 overtime victory, head coach David Quinn sent Shesterkin to the bench. He was in desperate need of a spark to rejuvenate his play.

And on the first of February against the Penguins, he got that spark he needed. In a crucial game for the Rangers, Shesterkin stepped up in a huge way. He had his best outing of the season by a large margin, stopping .962% of shots faced, while allowing only one goal. The Rangers built off of his strong performance and won the game 3-1. It was exactly what he needed. And this time around, the coaching staff showed their belief in their goalie of the future, naming him the starter against Washington.Â

In a game on the fourth of February against the then one-loss Capitals, Shesterkin was magnificent once again. He stopped .939% of shots and allowed two goals. Shesterkin made a number of impressive saves throughout the game, while leading his team to a 4-2 victory.

His save above hasn’t gotten enough praise. Attempting to stop a shot that is tipped is extremely difficult. The sudden change of direction makes it impossible to guess where the puck is going to land, but Shesterkin makes it look easy.

He kept building confidence in his following start against the Islanders, where he didn’t allow a goal until the 11:15 mark of the third period. Despite his stellar performance, his team was unable to pocket a goal at the other end, and the Rangers lost 2-0. His .933 save percentage was his third-best of the season though, and he single-handedly kept his team in it for more than 50 minutes.

It’s extraordinarily difficult to have fun playing a game when you’re struggling the way Shesterkin was. It’s clear he’s enjoying himself now though, and the video below proves it.

For those confused about the meaning behind the video, former Rangers defenseman Tony DeAngelo was recently waived by the time for fighting backup goaltender Alex Georgiev. It’s clear Shesterkin found the situation to be quite humorous, as he pretends to engage in a fight with forward Artemi Panarin – right in front of Georgiev. You love to see it.

When the doubters of Shesterkin came out, he quieted them, and he’s finally in his groove. The future is bright for the 25-year-old from Moscow, and best of all, the best is yet to come.