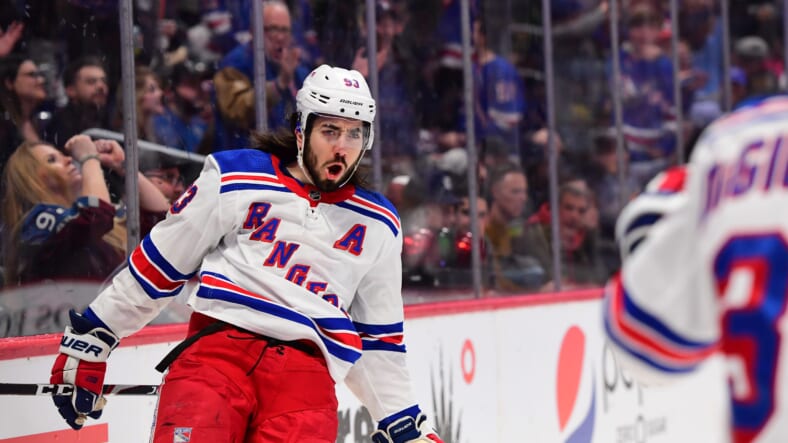 While the New York Yankees were getting swept in the Bronx by the Tampa Bay Rays, the New York Rangers kept their playoff hopes alive by sweeping the New Jersey Devils by a score of 5-3.

Sweeping a team in baseball is somewhat common, but not so much in the NHL. According to the NHL Public Relations, the Rangers are the first team in NHL history that has won four consecutive team games that were all against the same opponent in the regular season. The NHL does not usually give teams four straight games against the same opponent, but COVID-19 has required the league to make some scheduling adjustments for this season.

The Blueshirts did not make it easy, blowing another early three-goal lead before Mika Zibanejad slammed home a power-play goal with just three minutes left in the game. Ryan Strome was awarded an empty-net goal after a P.K. Subban hooking penalty on a breakaway to make the final tally for the Rangers.

Alexandar Georgiev made 10 saves on 10 shots but was helped off the ice after making a save at 17:41 of the first period. Igor Shesterkin made two saves on two shots in 2:19 of relief. Georgiev returned in the second period and finished with 25 saves.

After the game, Georgiev stated that something felt out of place with his left knee.Â  He credited the Ranger’s training staff for taking care of it and getting him back into play.

In his post-game interview, Zibanejad talked about how the Rangers regrouped after the Devils had rallied to tie the game. “You try to calm down on the bench a little bit and you try not to panic. There was a lot of hockey left and we had to go back and play hockey like we should. But give them (New Jersey) credit, they work real hard.”

Georgiev also talked about how the Rangers were able to “weather the storm” when the Devils tied the game. “After the second goal, they kind of got the momentum going. I think they really wanted to break the streak. It was a great job by us to weather the storm and for Mika to get the goal.”

“I thought we had a good 2nd period,” head coach David Quinn said in his post-game Zoom conference. “That second goal gave them momentum and then all of a sudden it is three-three. We found a way to get it done. Playing a team four times in a row, no matter what league you are in, you have to find ways to win.”

The Rangers are fifth in the eight-team East Division, four points behind the fourth-place Boston Bruins. Boston has two games in hand in fighting for the fourth and final playoff spot.

The Blueshirts will head travel to Nassau County to take on the Islanders on Tuesday night.