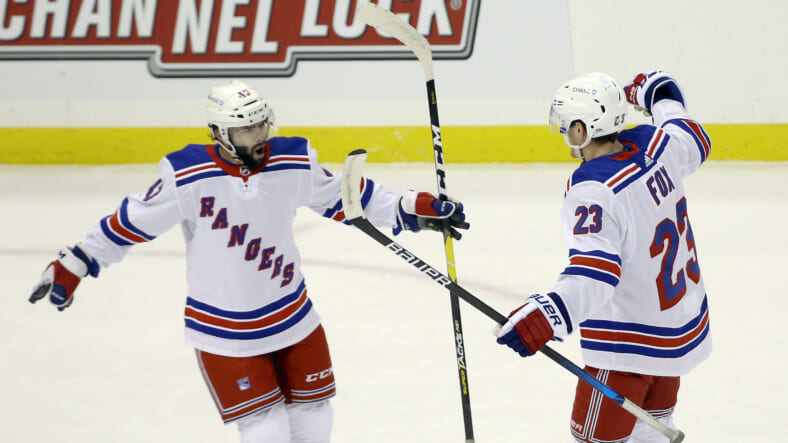 If you take a look at the list of players who have scored goals for the New York Rangers in their last five games, this list looks something like this: Colin Blackwell, Brendan Smith, Colin Blackwell, Pavel Buchnevich, Julian Gauthier, and Kevin Rooney. Not the usual group of suspects one would think of for Blueshirt scoring. Yet, these players have been the unlikely source of production while some of the top games work to get untracked.

Colin Blackwell has given the New York Rangers a big boost

Blackwell recorded the first power-play goal of his NHL career on Thursday night. He has now tallied a goal in two consecutive games for the first time in his NHL career. Blackwell has recorded five points (three goals, two assists) in seven games with the Rangers. His three goals have already equalled his total from last year in 27 games with Nashville.

It was not a move that got a lot of notice. On October 9, 2020, Blackwell was signed as a free agent a two-year contract worth $725,000 annually. The signing was likely more of a depth position addition. The Rangers were going to need some players that could fill out a taxi squad for 2021 to deal with the pandemic issues. That $725,000 signing has been quite the bargain so far.

With defensemen Jacob Trouba and Kâ€™Andre Miller not playing in Thursday night’s game, someone had to take their spot on key units. Rangers coach David Quinn not only had Anthony Bitetto in the lineup, but he also had the Island Park native man the points on the second power-play unit.

Bitetto responded by sending a nice power-play pass to Pavel Buchnevich, whose shot was tipped in by Blackwell for his third goal of the season. The assist was Bitettoâ€™s first as a Ranger.

After the game, teammate Brendan Smith said of Bitetto “A guy like Bitetto is always going. Heâ€™s always firing, keeping that energy high. Teams need that. Heâ€™s great at that. People donâ€™t get down on themselves. You keep going. You keep striving to get better. Those guys like him, theyâ€™re a diamond a dozen.â€

As long as some of the top players continue to struggle, it will take guys like Blackwell and Bitetto to keep up their outstanding play so that the Rangers can compete for a playoff spot.