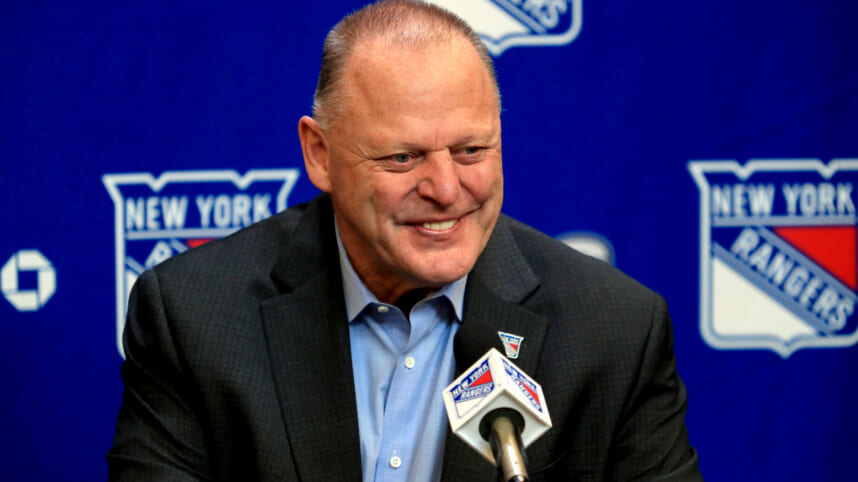 New York Rangers head coach Gerard Gallant spoke with the media on Wednesday afternoon and has some surprising news about the lines he intends to start with on Thursday.

New York Rangers head coach Gerard Gallant spoke held his state of the Rangers press conference with the media on Wednesday afternoon following player medicals. He addressed the lines he will be using starting tomorrow’s scrimmages, and they will look different from the team’s last game in the Eastern Conference Finals.

The kid line will be reunited, Sammy Blais will get a shot back on the first line, and Vitali Kravtsov is penciled in to start on the second line. Barclay Goodrow will not play in scrimmage games but will participate in practices. He suffered a broken ankle in the playoffs, so the team will proceed slowly with him in camp.

Nothing was said regarding if he will participate in any of the preseason games. Sammy Blais is at 100% following his knee injury last season.

Gallant had this to say about the bottom pair defenseman,

I don’t know. Training camp will decide that. Schneider is going to be there. You know that. The top five is there, and then there’s a fight for that spot.”

Zac Jones, Libor Hajek, Matthew Robertson, and Matt Bartkowski appear to be the players competing for the sixth defensive spot.

Thursday begins the first of three days of practice and scrimmages. The players will be split into three groups. Two will scrimmage with the third group practicing after, and it’ll rotate each day.

The lines Gallant goes with I the scrimmages will be constantly evaluated as nothing is set in stone to begin camp.

Expectations are high for this, but Gallant knows he has to manage those expectations in the locker room.

You can’t worry about what happened last year. I mean, Chris Kreider scored 52 goals last year. I’m gonna be on his ass to score 52 again this year.

Plenty of questions and maneuvering lie ahead for the organization, and it all begins Thursday in Tarrytown, NY, at the team training facility. The Rangers will play their first preseason game on Monday against the New York Islanders at Madison Square Garden.