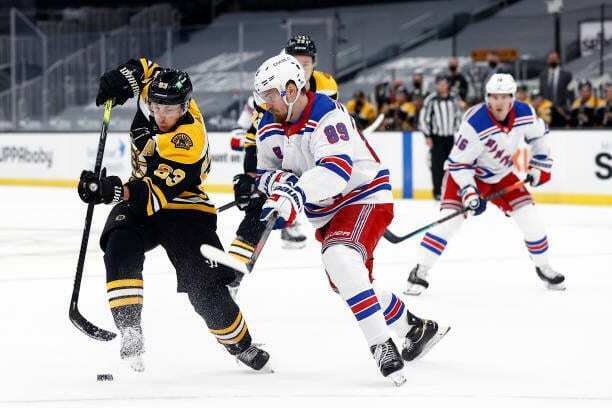 BOSTON, MASSACHUSETTS – MARCH 11: Brad Marchand #63 of the Boston Bruins skates against Pavel Buchnevich #89 of the New York Rangers during the first period at TD Garden on March 11, 2021 in Boston, Massachusetts. (Photo by Maddie Meyer/Getty Images)

The New York Rangers could have just played out the season and left for vacation. Instead, the Blueshirts put in a strong effort in defeating the Boston Bruins 5-4 to wrap up their 2021 season.

Keith Kinkaid made 28 saves before leaving with an injury midway into the third period. Igor Shesterkin finished up in goal with seven saves.

Alexis Lafreniere and Vitali Kravtsov also scored in a wild third when the Rangers overcame a 2-1 deficit. K’Andre Miller started the scoring with a goal in the first period. Pavel Buchnevich seemed a little snakebit with his puck shooting but did add three assists in the victory.

The victory will bolster the spirits of the New York Rangers

Heading into the offseason, the win against a playoff-bound Bruins team should help bolster the spirits of a young Rangers team.

That sentiment was echoed by Zibanejad in his post-game Zoom comments. “It means more than what you would think right now. Especially the way things have been going the whole season, especially the last 10 days or so, that’s been kind of crazy with the guys that are not here right now. The way we battled through it and get the win, that was good.”

In his post-game conference, head coach David Quinn noted that it was nice to give newly appointed general manager Chris Drury his first win. “I know all of us were very happy that we were able to get him that first one.”

After the firing of John Davidson and Jeff Gorton earlier in the week, it will be Quinn that decides which direction the franchise is heading, including on whether or not to retain Quinn as head coach.

Quinn also was pleased with the effort and the win stating that “it’s been difficult. It was great to finish the way we did.”

With the win, the Rangers will finish in fifth place in the NHLâ€™s East division.