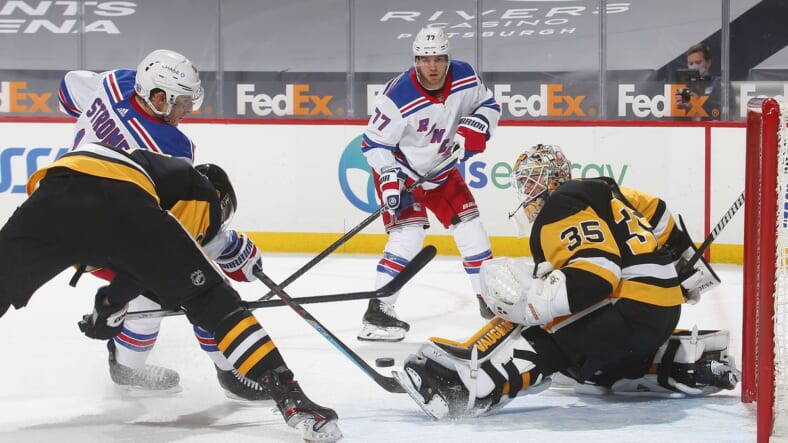 After taking another lead into the third period, the New York Rangers surrendered two goals in the third to fall to the Pittsburgh Penguins 3-2. Jake Guentzel scored the game-winner with just 1:31 left in the game. It was the 100th goal of Guentzel’s career.

Colin Blackwell started the scoring for the Blueshirts by redirecting an Adam Fox shot past Penguins goaltender Tristan Jarry at 16:36 of the first period. Blackwell was promoted to the active roster from the taxi squad for this game. The 27-year-old played 27 games with the Nashville Predators last season, recording 10 points and 31 shots on goal.

After a Bryan Rust goal tied it up for Pittsburgh in the second period, Ryan Strome chipped in a shot later in the second period to give the Rangers a 2-1 lead. Jacob Trouba put the initial shot on goal from the slot, and Strome flipped the rebound over Jarry from the top of the crease. Artemi Panarin also had an assist on the goal and has points in four consecutive games.

Work for it. Get rewarded. ? pic.twitter.com/lsJO78Rd7Q

After the game, Mika Zibanejad addressed in the post-game Zoom conference the issue of not being able to hold on to third-period leads by saying that “It’s happened two games in a row where we have a lead and can’t close it out. I think it’s a mix of things that we have to do better, to learn from, and to do it quick.”

A disappointed head coach David Quinn said in his post-game Zoom conference that “You have to find ways to win. A guy can’t get a shot from that area with a minute and thirty to go. You have to have an urgency, you have to know who is dangerous. To come in here and play some good hockey and get just one point is really disappointing.”

Quinn also addressed the fact that while some of the younger players are doing well, some of the veterans need to step up. “The veterans know that they have got to be better. We have talked to them privately, and they know it. The good news is that these guys are established players in this league.”

Filip Chytil left the game after a collision with the Penguins Evan Rodrigues. Quinn said that he is being evaluated and that they would know more on Monday.

The Rangers now head to Buffalo for two games on Tuesday and Thursday. The Rangers will host Pittsburgh for a two-game set on Jan. 30 and Feb. 1 at Madison Square Garden.