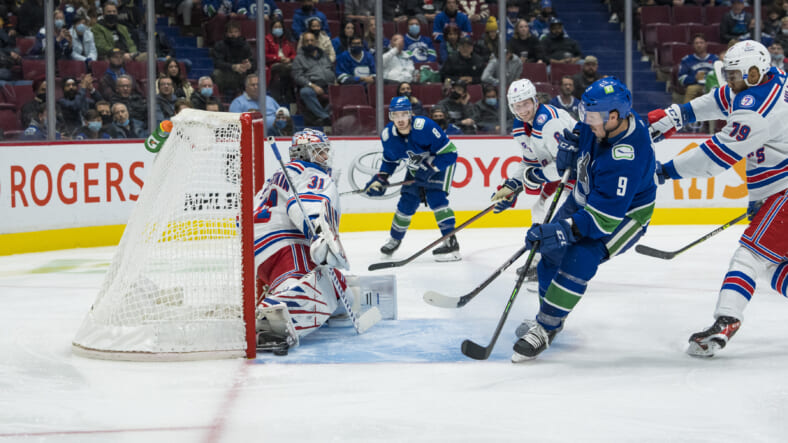 The New York Rangers’ five-game road winning streak ended on Tuesday night with a 3-2 OT loss to the Vancouver Canucks.

A complete 60-minute hockey is going to be needed if the New York Rangers are going to have any chance at a playoff birth. Â Tuesday night loss to the Canucks was a result of the team failing to play a strong final period in their 3-2 loss.

The good news for the New York Rangers is they have been improving when they have the man advantage. The bad news from Tuesday night’s loss was the team couldn’t find a way to score an even-strength goal.

With that loss, the team’s five-game road win streak comes to an end, but they continue toÂ extend their road point streak to six games.

The Rangers had built a 2-0 lead entering the third period on power-play goals by Mika Zibanejad and Artemi Panarin. Â Adam Fox had assists on both of the goals, giving him nine points in the team’s first 10 games.

Mika Zibanejad recognized why the team was unable to keep their road winning streak alive, acknowledging that it takes a complete game to get wins in the NHL.

“We made a couple mistakes, they obviously had a push back and scored on their chances in the third,” center Mika Zibanejad said to Kevin Woodley of NHL.Com. “I thought we did a pretty god job up until the third, but it wasn’t a full 60 minutes and that’s why we sit here with the loss.”

With his two assists, Fox recorded his 100th career point in his 135th career game. Fox becomes the 22nd defenseman in NHL history and third in Rangers history (Sergei Zubov, Brian Leetch) to notch 100 points in 135 or fewer games. Of the 22 defensemen, 16 are in the Hockey Hall of Fame. With 11 points in 10 games, Fox is the first Rangers defenseman since Brian Leetch in 2001 to record 11 or more points in the first 10 games of a season.

The Rangers were 6-6 on the PK Tuesday night. TheyÂ have killed off 27 of their last 28 penalties since October 16. In that span, New Yorkâ€™s 96.4% PK leads the NHL.Â The last time the Rangers had a perfect PK when shorthanded six or more times was Feb. 1, 2021, against Pittsburgh. (NYRPR)

Jacob Trouba and K’Andre Miller had a poor third period, as did the entire team. Â Trouba was a minus 2 on the night with Miller a minus 3.

The third line of Lafreneier-Chytil-Blais was a combined minus 3 on the night. The coach had called out that line, stating he expected them to play better than they did in their last game at Seattle. Â The line combined for just one shot on goal which Blais had in the first period.

For the second consecutive game, the Blueshirts allowed 13 shots against. Â Igor Shesterkin held the Canucks scoreless in that period but was unable to keep them off the scoresheet in the third period.

The Ranger’s next game will be against Connor McDavid and the Edmonton Oilers on Friday night.