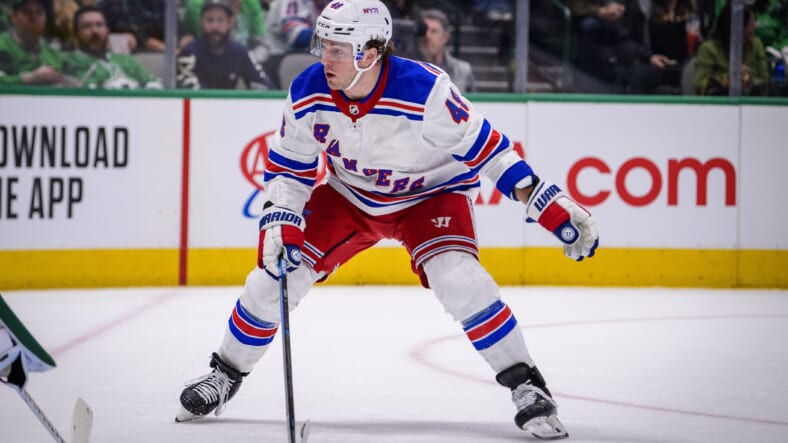 The New York Rangers are in danger of losing several players amid recent rumors:

The NHL is still trying to figure out if there will be a reactivation to their season. Â The questions of where games could be played or if the regular season will be completed were the main topic of conversation until a so-called change in play was mentioned Monday night.

Possible restructuring of how the game of hockey could look may have a significant effect on the New York Ranger’s hard-nosed and intimidating style of play. One that could have a player like Brendan Lemieux sitting on the bench instead of agitating the opposition.

The tweet in question was posted by Ryan Rishaug, a TSN reporter for the Edmonton bureau.

Blue-Skying some potential tweaks to the game with a medical expert to allow play during a pandemic. See below for a few ideas and a quote from Bill Daly on the NHL's willingness to entertain potential changes. pic.twitter.com/Stdrl8gvZV

Rishaugh brainstormed with an infectious disease specialist who tries to give a vision to the fans of what the NHL may look like should the league be able to resume the 2019-’20 season. It is not the game we had before the shutdown in march.

At first glance, things look pretty good. Players might be told that full-face shields would be worn to help prevent the spread of droplets. The hockey version of a face covering.

The next step mentioned, no fighting. No scrums after whistles to prevent linesmen from having to break them up.

Now wouldn’t that be great hockey? Â Artemi Panarin flies down the ice dishes the puck to Ryan Strome and BAM, Panarin is flying across the ice surface after a late hit. But it’s ok, Lemieux or maybe Chris Kreider can’t do anything about it. No getting into his face talking garbage, no standing up and defending one of the best players on the ice. Just move along, guys.

Ridiculous to even comprehend.

The coaches would have to social distance on the bench wearing masks. No word on the trainers, I guess they can social distance in the hallways. If a player needs equipment repair or medical attention, they can have a coach move out of their path and help the player out.

Here is a fun one to try, the wingers would need to maintain a two-foot distance on face-offs instead of the traditional way of standing in front of one another with their sticks crossed. Â Here is another reason not to dress Lemieux or a tough player like Julien Gauthier.

This is called the “let’s all get along” face-off draw.

Lastly is suggested no spitting on the ice or the bench.

To be fair, NHL’s Bill Daly did comment on these potential changes to play.

“We consider anything our infectious disease experts and advisors might recommend, but I’m not sure given the circumstances of our game that any dramatic modifications would rally be necessary.”

If all of these possible scenarios are even in the realm of possibility to get hockey back this season, the NHL and NHLPA should walk away and cancel the season. The idea that so much would have to change on the ice just to get the season restarted just to play will tun this great game into a mockery.

This is hockey. No fighting, well, that can work even though the traditionalist fans would rebel against it. No scrums after whistles will never work, especially during a playoff hockey game.

Fighting is always reduced during the playoffs, but pushing and instigating after whistles happens all the time. Â It is as much of playoff hockey as is lacing up the skates to play the game.

There has to be a breaking point, a time when the league may just have to throw in the towel on say “no mas”!

The fans are already out of the equation for the foreseeable future. Now it’s truly up to the NHLPA, and it’s players to protect the game for its fans.

It is hard enough to comprehend how the NHL could start up with so many questions off the ice to consider, but if some of these topics are deal-breakers, the league might be better off moving on to next season now.

For the intimidators and hard-hitting players like Lemieux. Kreider or a Ryan Lindgren changing the rules of the game now would change the style of the game these guys play every night.