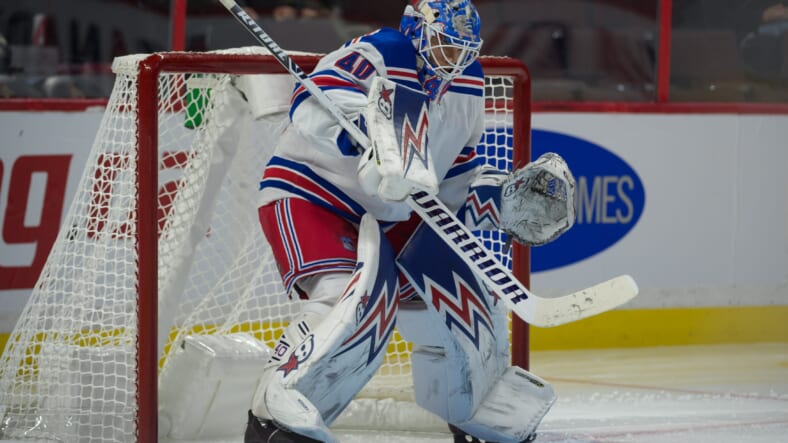 Oct 5, 2019; Ottawa, Ontario, CAN; New York Rangers goalie Alexandar Georgiev (40) warms up prior to the start of the second period against the Ottawa Senators at the Canadian Tire Centre. Mandatory Credit: Marc DesRosiers-USA TODAY Sports

The game started well for the New York Rangers. After scoring an early first-period goal, the Pittsburgh Penguins scored three times in a matter of 61 seconds late in the first en route to a 5-1 victory.

Mika Zibanejad opened the scoring for the Rangers with a goal at the 1:18 mark of the first period. Pavel Buchnevich had the primary assist, which was his 100th career NHL assist. After a slow start to the season, Zibanejad has tallied a point in three of the last four games (one goal, two assists). He has now registered six points (two goals, four assists) in the last eight games.

Zibanejad was not really in a celebrating mood after the game saying in his Zoom conference: “It didn’t really matter this game, so we’ll just move on.”

That was because the Penguins scored those three goals at the end of the first period. John Marino tied it 1-1 at 16:13, two seconds after a Penguins power play expired. Kaspari Kapanen then scored on a breakaway to give the Penguins a 2-1 lead at 16:52. Sidney Crosby made it 3-1 at 17:14. After taking a pass from Brian Dumoulin, Crosby split the Rangers defense before scoring.

After the three-goal outburst, Alexandar Georgiev was pulled in favor of Keith Kinkaid, who had 16 saves in relief. He gave up two late third-period goals on odd-man rushes but was solid throughout his time in net.

Head coach David Quinn did not commit on which goaltender he would start on Tuesday night.

Jacob Trouba said after the game in his Zoom conference that the Rangers tried to regroup after the first period but added “Give the Penguins some credit too, they got the lead and they played a pretty tight game defensively.”

The Rangers and Penguins will tangle again on Tuesday night, part of NBCSN’s Hockey Happy Hour. The puck drop is scheduled for 6 p.m.