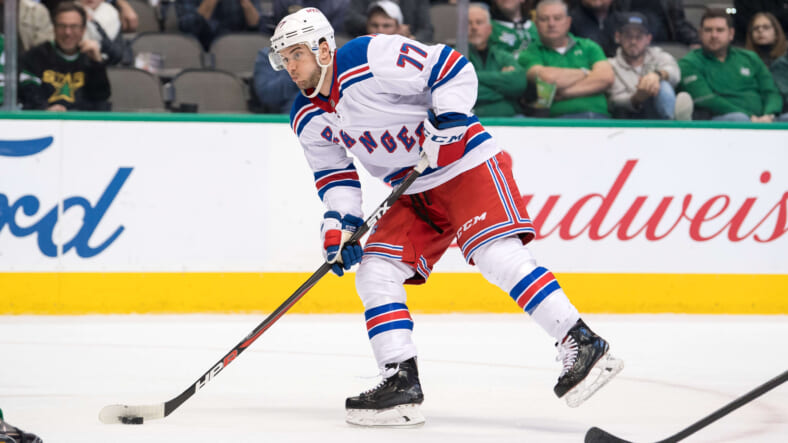 The New York Rangers must figure out a way to improve the defense despite a strong NHL draft if they want to improve on last season.

General manager Jeff Gorton did all he could to improve the team’s blueline with the team having little salary cap space to use on free agent players.

He was able to shed some salary by trading veteran defenseman Marc Staal convincing the Detroit Red Wings to assume all of Staal’s $5.7 million he will make for the 2020-2021 season. With a head cap of approximately $81.5 million, which includes a $3.95 million “bonus cushion penalty,” the club is in a fiscal crisis of sorts as they look for a defenseman to improve the defensive side of the ice.

Gorton signed free agent Jack Johnson, formerly with the Pittsburgh Penguins, to fill the vacancy open with the trade of Staal.

The 33-year-old defenseman has played in 937 games in the NHL for the Los Angeles Kings, Columbus Blue Jackets, and the Pens, recording 70 goals, 232 assist for 302 points. He averaged a tad over 19 minutes per game in his two years in Pittsburgh, though his point production was the worst it has been in 14 years, scoring only four goals with 20 points in the 149 games he appeared in.

The Rangers did lock in one of their restricted free agents when they re-signed Anthony DeAngelo. The Sewell, New Jersey native, signed a new two-year, $9.6 million contract avoiding an arbitration hearing in the process.

With a backlog of right-handed defenseman, DeAngelo will most likely switch to the left side when training camp begins later this year.

DeAngelo, who has played in 200 NHL games, has come into his own with the team providing a strong showing on the powerplay. He had a solid season last year, scoring 15 goals with 53 points, which was fourth in the team in scoring, leading all defensemen on the team. He had 16 power-play assists and three power-play goals.

The 24-year-old is entering his fourth season in New York after being acquired in a trade with the Arizona Coyotes in June 2017.

DeAngelo is a top-four defenseman on the team and will certainly see his ice time increase this year. He has averaged 18:46 of ice time per game with different partners throughout his time on Broadway. Coach David Quinn has become more confident using him in tight situations with the defenseman’s quickness on the ice developing along with minimizing his decision with the puck.

Other Await in The System

The Rangers have two prospects who might get called up should the team look to improve through the season.

Nils Lundqvist is a Swedish ice hockey defenceman currently playing for LuleÃ¥ HF of the Swedish Hockey League. Lundkvist was selected in the first round, 28th overall, of the 2018 NHL Entry Draft by the Â Rangers.

The 20-year-old has recorded two goals with four points in nine games this year for Lulea.

In the 2019-2020 season, Lundqvist had some impressive achievements:

K’Andre Miller was drafted 22nd overall by the Rangers in the 2018 NHL Entry Draft. He played at Wisconsin under former Ranger Tony Granato.

In the 2019-2020 college season, he appeared in 36 games, netting seven goals with 18 points. He signed his entry-level contract in March and is anticipated to attend training camp with the Blueshirts.

He was ineligible to join the team in the qualifying round in Toronto but was able to practice with the club this summer. Coach Quinn was impressed with what he saw of the rookie. Quinn, speaking to Larry Brooks in July, has this to say about the first-round draft pick,

â€œI love the fact that he didnâ€™t try to do too much. He let the game come to him and did a good job defending,â€ Quinn said of Millerâ€™s work in the scrimmage. â€œLike I said [Thursday], I loved the plays he was making in small areas, on quick turnovers he made the right play.

â€œJust a lot of good things from him over the last couple of weeks.â€

He is a long shot to make the team out of camp with no NHL experience, the same stands for Lundqvist, but the potential and expectations for both players are high as they look to gain experience from overseas and playing with the teams AHL affiliate Hartford Wolf Pack.

The Rangers also have Libor Hajek. The defenseman played in 38 games for the team but never seemed comfortable with the speed and quickness of the players around him. He started the season playing in the home opener against Winnipeg playing but eventually was eventually sent down to the Wolf Pack after suffering a knee injury. He was not recalled for the remainder of the season. He is also expected to attend training camp to contend for one of the six spots or possibly be the “seventh” defenseman.

For the time being, the team will go with the six defensemen currently on the roster, Jacob Trouba, Brendan Smith, Â Adam Fox, Ryan Lindgren, Johnson, and DeAngelo.