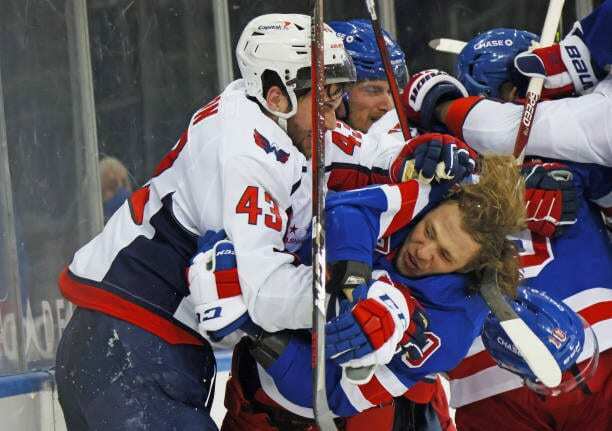 NEW YORK, NEW YORK - MAY 03: Tom Wilson #43 of the Washington Capitals takes a roughing penalty during the second period against Artemi Panarin #10 of the New York Rangers at Madison Square Garden on May 03, 2021 in New York City. (Photo by Bruce Bennett/Getty Images)

The New York Rangers could not take advantage of the Washington Capitals missing a handful of players, including one of the best in the NHL. The Capitals trailed by one late in the second period but rallied to defeat the Blueshirts 6-3.

With Boston winning earlier, the Rangers have been eliminated from the playoffs.

The Capitals were missing a few players, including Alex Ovechkin, who only skated one shift in the first period before leaving the ice. Washington later announced that he would not return due to a lower-body injury.

Evgeny Kuznetsov and Ilya Samsonov also missed Monday’s game for disciplinary reasons while T.J. Oshie was out for a personal family matter.

Things got interesting in the second period when Capitals forward Tom Wilson was handed three penalties in the second quarter. One of the penalties was a 10-minute penalty for misconduct, after roughing Artemi Panarin and going after Pavel Buchnevich in the crease after play had stopped. This included a few punches in the back of the head while Buchnevich was face down.

Panarin had a cut above the eye and appeared to have hit his head on the ice in the scuffle. He did not return at the start of the third period.

After the game, Zibanedjad had this to say about the Wilson incident: “You should have more respect for the game and the players. I honestly don’t know where to start. It’s just horrible, zero respect.”

Head coach David Quinn also shared his thoughts on the incident in his post-game Zoom conference. “There are lines that can’t be crossed in this game. It’s just zero respect for the game. You have one of the star players in this game who could have been seriously, seriously hurt. It’s totally unnecessary.”

The two teams will play again on Wednesday at MSG.