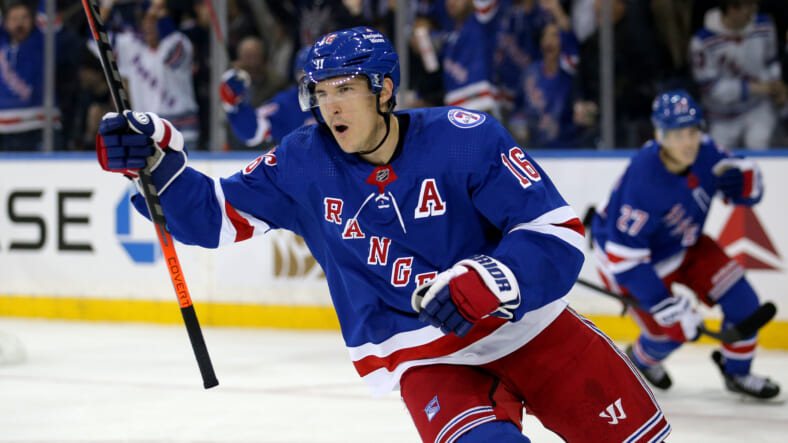 The New York Rangers have been exceeding expectations all season, but the business side of hockey is about to show its ugly self regarding the status of Ryan Strome.

Center Ryan Strome has been a stud for the New York Rangers since his arrival to the club following a trade with the Edmonton Oilers in exchange for Ryan Spooner in November of 2018.

Strome has done everything asked of him and more since he stepped on the ice for the Rangers. In his first year in New York, he appeared in 63 games scoring 18 goals and 15 helpers for 33 points.

Then the Rangers signed superstar Artemi Panarin in July of 2019 and a beautiful partnership was created.  In the 2019-202 season Strome played in 70 games (the season was shortened due to the pandemic).  Strome had 41 assists that season with 59 points.

He had proven himself as a bonafide playmaker, but not without some criticism. Many believed his numbers were based more on the hands of Panarin than the skill of Strome himself. This is an unfounded and unjust rumor in the hockey world.

Former General Manager Jeff Gorton and Strome’s management team negotiated a two-year $9 million contract. The ending term would make Strome an unrestricted free agent. The 28-year-old will be able to walk away without any compensation to the team if the two sides don’t work out another deal.

Another scenario would be to make a trade before the deadline in March.  This is the last thing the Blueshirts would need with the team and its close bond is so strong currently.

The question is what is the value for the 10-year veteran and are the Rangers willing to pay that price?

With the new contracts signed by Chris Kreider, Mika Zibanejad, and Adam Fox along with Artemi Panarin’s large deal, the team will have to be selective about how much they offer Strome if they offer anything at all.

Chris Drury also has to look at future contracts for this team.  Kappo Kakko will be a restricted free agent at the end of this season along with Julien Gauthier, Libor Hajek, and Alexandar Georgiev.  The latter two are arbitration-eligible which adds more drama to the contract issue next season.

Yet it’s hard to believe the Rangers would trade Strome, never mind let him walk away. Since this is considered to be his best year to sign a long, lucrative contract, He will probably be looking for a 6-7 year deal between $6.3-7.3 million per.

This would be in line with what Kevin Hayes of the Philadelphia Flyers, signed in June 2018. That was a seven-year $50 million contract. New York Islanders Brock Nelson signed a similar contract to Hayes in 2019.  The difference with Strome is his value to the team is much higher than is Hayes and Nelson to their clubs.

Leadership On and Off the Ice

Strome is not just a playmaker on the ice, over the course of this season he has become the face of the Rangers.  There have been plenty of nights when Strome is on the podium talking to the media regardless of wins or losses. The enthusiasm and respect he has earned from the media make him the logical person to speak on behave of the Blueshirts.

His support for the team, the way he speaks to the media, displays the pride he has in wearing the Rangers sweater.

Sometimes signing a player is more than the money, it is sometimes about a player’s personality, passion, and what he brings to the rink every day. Strome has an infectious smile and enthusiasm that makes everyone a better player around him.

He does this without effort. The love of the game is part of the price the team will pay to keep him in New York. This former firsts round draft pick of the New York Islanders (5th overall selection in the 2011 NHL Draft) has done everything to earn himself a big contract.

Would he be willing to take a “home town discount”?  Time will answer that question, but just seeing how he handles himself this writer wouldn’t be surprised. Either way, the Rangers have to find a way to keep him on this team.

It would be devastating to lose Strome right before the playoffs began due to a trade.

Conversations are probably underway, numbers and years being thrown around by both sides in the hope that he will be skating with Panarin and the rest of his teammates for several years to come.