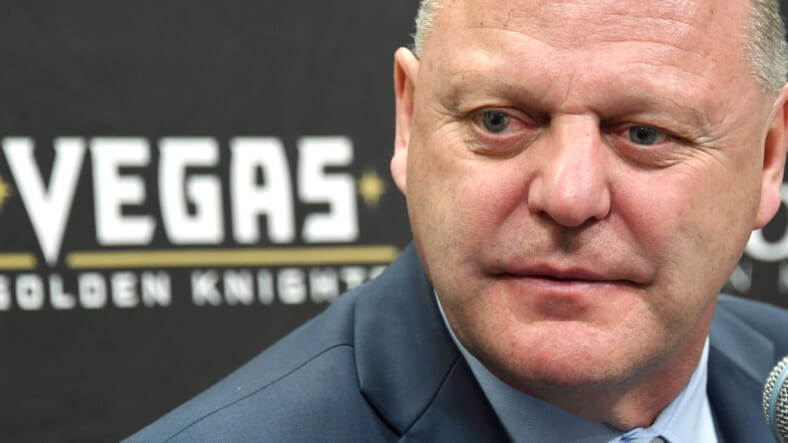 The New York Rangers held press conference on Tuesday introducing new head coach Gerard Gallant, displaying what kind of team Gallant wants to bring to Broadway, but might have had more questions than answers at its conclusion.

The Gerard Gallant era in New York officially began on Tuesday when the media had their first opportunity to hear what the new man behind the bench had to say. In an unsurprisingly voice, the 57 -year old let the NHL and Rangers fans know exactly what he wanted his new team to be known for.

“I want us to be the hardest-working team in the league.”

Work ethic, grit and never being outplayed by the opponent has been the trademark of every team gallant has coached.

Some other interesting takes from yesterdays press conference centered around the younger players on the team along with is acknowledgement that it will take all 23 players on the roster to turn the club into a winning team. when he was discussing the younger member’s of the team Gallant offered a statement of faith and opportunity,

Chris Drury Has Difficult Task Ahead

Incase one would be thinking that the hard part for the Rangers GM is over, think again. In order for this transition from David Quinn to Gallant to be successful, Drury will need to immediately look at what he needs to improve and then find a way to that. The laundry list of what to do next includes the NHL expansion Draft, the NHL Draft, and free agency which is scheduled to begin with the conclusion of the Stanley Cup Finals.

The Rangers have some players offensively that will not be touched.Â  Artemi Panarin, Mika Zibanejad, Alexis Lafreniere, Adam Fox, Jacob Trouba andÂ  Igor Shesterkin are a few names to be mentioned.Â  The area where the team needs to improve is at the center position and the level of toughness that was lacking last season.

This team needs to be built from the bottom up. The players that sit on the fence regarding roster spots or remaining a Blueshirt should come as no surprise.

Staying or Shipping Out

These players are good hockey players, but for one reason or another never found a productive place in the lineup consistently. A lineup that appeared bottom heavy will need to thin out and form into a tough, hard forechecking, reliable third and fourth line for Gallant to lean on. Some of that need is already there with Vitaly Kravtsov and Philip Chytil so the job for Drury does have some sought of outline laid out.

Great teams use a balance of a smart general manager along with intelligent head coaching that know how to push the right buttons at the right time. Gallant can only push the buttons of the 23 players Drury sets up for him.

The puck is once again of the stick of Chris Drury. If the Rangers ever needed a big score from their former captain its going to be over the summer battling hard against the NHL to come away with that big win that should launch this team back into the postseason.