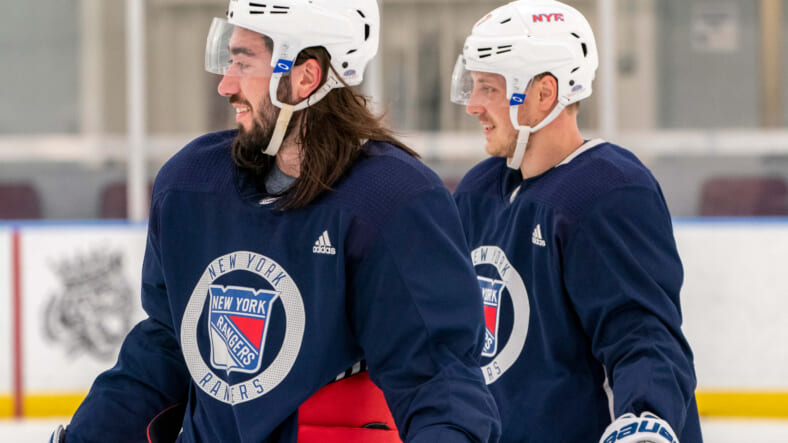 New York Rangers hockey is back and MSGN will carry all of the Blueshirts Qualifying Round games beginning Aug. 1 when their best of five series begins against the Carolina Hurricanes.

Coverage of the Rangers’ first game since late March will begin with pregame coverage at 11:30 a.m. The whole Rangers broadcast team will be live from the MSG Networksâ€™ studios in New York City.

Play-by-play announcer Sam Rosen, the recipient of the 2016 Foster Hewitt Memorial Award from the Hockey Hall of Fame, and analyst Joe Micheletti will call the game action remotely each night. John Giannone will host pregame, postgame and intermission coverage throughout the series from the networkâ€™s studio as well, alongside former Rangers goalie and Emmy Award-winning studio analyst Steve Valiquette.

The full schedule can be seen here

The Rangers will be the home team for games 3 and game 4 if it’s necessary. Â The Qualifying Round will take place from the Scotiabank Arena in Toronto, home of the Maple Leafs.

For those fans who can’t wait until August to see the Blueshirts hit the ice, MSGN will also televise the team’s exhibition game against the rival New York Islanders on July 29 at 8:00 p.m. with a 7:30 p.m. pregame show.

In anticipation of the return of hockey, MSG Networks will be airing two new Rangers preview shows on Tuesday, July 28th and Thursday, July 30th, featuringÂ interviews with Coach Quinn and various Rangers players. During each show, Rangers broadcasters Sam Rosen, Joe Micheletti, John Giannone, and Steve Valiquette will break down the upcoming qualifying matchup and provide fans with the latest news and info on the team before they get set to return to the ice.