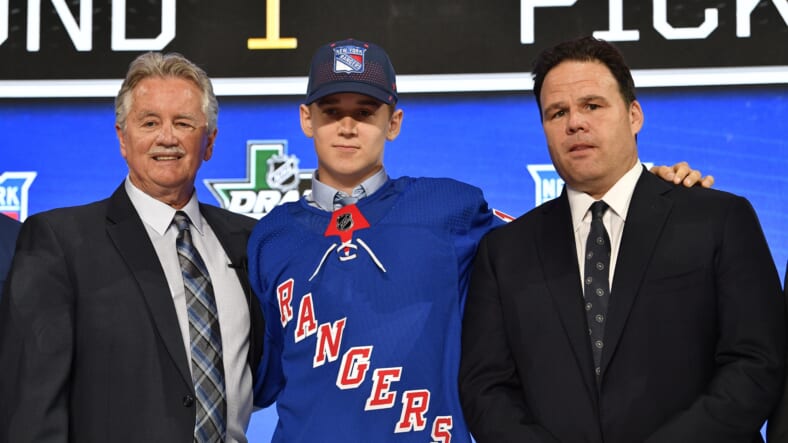 Jun 22, 2018; Dallas, TX, USA; Nils Lundkvist poses for a photo with team representatives after being selected as the number twenty-eight overall pick to the New York Rangers in the first round of the 2018 NHL Draft at American Airlines Center. Mandatory Credit: Jerome Miron-USA TODAY Sports

Beginning tonight with “MSG Rangers Shorts”, MSG Networks will begin to air special programming previewing the draft for the Rangers as John Giannone, Joe Micheletti, and Steve Valiquette will break down the play of some of the top prospects that the Rangers might target with the 1st overall pick.

Rangers President John Davidson will also join the draft preview coverage, where he will provide tremendous insight into the current state of the Rangers and reaction on some of the organizationâ€™s recent moves involving Henrik Lundqvist and Marc Staal.

On Monday, Oct. 5, the “Rangers Draft Preview” show will be on the air at 8:00 p.m. with John Giannone, Joe Micheletti, and Steve Valiquette.

Tuesday, Oct. 6 is the NHL Entry Draft. MSG will air their “NHL Draft Special”, featuring live commentary from John Giannone, Steve Valiquette, and Devils broadcasters Erika Wachter and Bryce Salvadore. The networkâ€™s draft show will include real-time analysis of the top pick made by both the Rangers and Devils, who will be selecting first and seventh overall respectively. The Rangers will also pick 22nd in the first round, with the Devils selecting 18th and 20th as well.

Wednesday, the night before the NHL free agency period begins, MSG will air their “NHL Free Agency Preview,” with Rangers broadcasters John Giannone, Steve Valiquette, Islanders broadcasters Shannon Hogan and Butch Goring, and Devils broadcasters Erika Wachter and Ken Daneyko providing viewers with an inside look into the potential moves and roster decisions facing the Rangers, Islanders, and Devils this offseason. They will then return the following night for â€œMSGâ€™s NHL Free Agency Special,â€ which will air live on Friday, October 9th at 8:00 pm ET, and highlight the latest news and updates from the first day of free agency.

It’d going to be an exciting time next week with the Rangers drafting the first overall pick in this year’s draft. Â MSGN will have it all covered on the television and on its MSG Go streaming service.