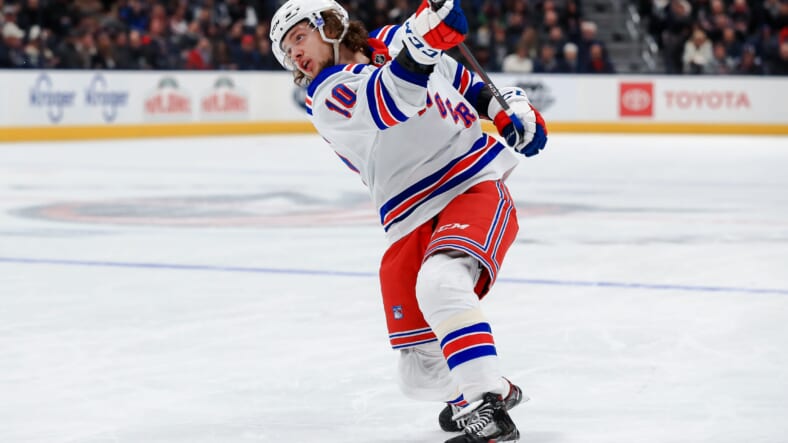 The New York Rangers defeated the Chicago Blackhawks 6-2 for their 7th victory in a row on Tuesday night. The game was highlighted by not only Artemi Panarin scoring his 500th point of his career but also by a booming hit by Jacob Trouba that sent Juuhar Khaira to the hospital on a stretcher.

The Rangers got out to an early lead 1:01 into the 1st period on a Jacob TroubaÂ bomb from the right circle. The feed from Artemi Panarin was his 500th point in just 497 games. Becoming just the 49th player in NHL history to accomplish this feat. Panarin capped off the night with another assist and 2 more goals, including an empty netter and the 1st star of the game.

In a scarier moment, at 13:50 into the 2nd period, Juuhar Khaira accepted a pass from behind him while exiting the defensive zone. His head was down while he was trying to find the puck, and Jacob Trouba stepped up and laid a huge hit on him. No penalty was called because it looked like the initial point of contact was Khairaâ€™s chest. The only reason his head/chin was hit was because his head was down. Not because Trouba was headhunting.

Khaira out cold after this hit from Trouba pic.twitter.com/5h3flSUetA

This game was indicative of what has become Rangers hockey. They do not give an inch, all four lines forecheck, and they stick up for each other. This was apparent after a very questionable hit from behind on Dryden Hunt by Ryan Carpenter. Ryan Strome came screaming in and dropped the gloves, and started throwing punches in a true show of camaraderie. What happened last year after the Tom Wilson incident will not happen again with this current team. Bet on it.

– Alexander Georgiev stood tall in net tonight. Saving 24 of 26 shots for a .923 save percentage for the Rangers. It took his record this year to 4-1-1 with a .876 SV%. His playing well in goal the last 2 Â½ games has been a huge boost for this team with Igor Shesterkin out. Igor is on injured reserve with a lower-body injury he sustained on Friday night against the Sharks.

– Mika Zibanejad is now on a 13 game scoreless streak. Although he does have 10 apples in that timespan