Live From Carolina: Did We See Chris Kreider’s Last Road Game With the New York Rangers? 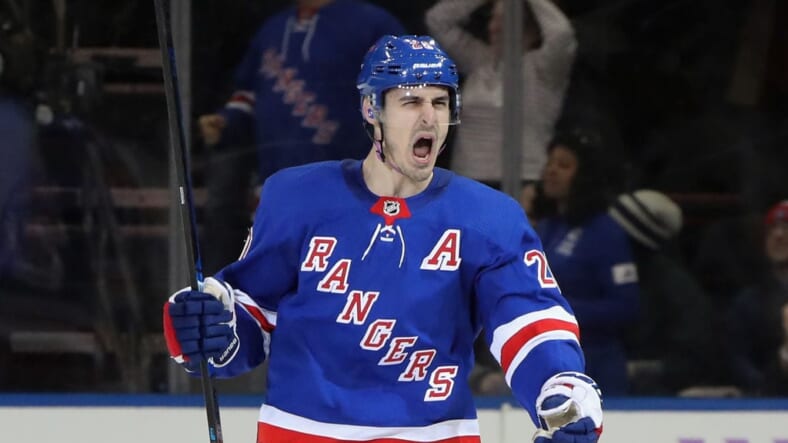 The New York Rangers survived a minor winter “storm surge” in North Carolina and as well as the Carolina Hurricanes themselves en route to a 5-2 victory Friday night. There were many of us in Ranger Blue present at PNC Arena in Raleigh, who was wondering if we were witnessing Chris Kreider‘s last road game as a New York Ranger. A large number of Blueshirt fans in attendance also witnessed Artemi Panarin and Mika Zibanajed each scoring goals as Igor Shesterkin made 27 saves to lead the Rangers to their seventh straight road win.

Can the New York Rangers sign Chris Kreider to a deal?

On Monday, Pierre LeBrun of TSN reported that the Rangers and Kreider’s representatives were in serious talks to reach an agreement. At this point, it appears that the Rangers are making a strong effort to sign the 28-year-old forward to a deal. If they cannot sign him, he will probably be moved before the 3 PM deadline.

One of the projected teams that may have been very interested was the Boston Bruins. However, the need for Kreider became a little less critical for the Bruins when they acquired speedy winger Ondrej Kase from the Anaheim Ducks on Friday. What this could mean is that if Kreider stays, the Bruins might be interested in acquiring a lower cost forward like Pavel Buchnevich.

He may not command the same return as Kreider, but Buchenevich will still undoubtedly come at a steep cost for the Bruins if the Rangers deem him to be available, as he is currently ranked 28th on the TSN Trade Bait List. That price may be easier to stomach for the Bruins, however, given that Buchnevich carries a $3.25 million cap hit this season and next season.

This makes him more than just a rental for a Bruins team very much looking to capitalize on their aging coreâ€™s remaining competitive seasons. Kreider is set to become an unrestricted free agent on July 1. The left-wing has spent his entire career with the Rangers after he became the 2009 NHL Entry Draft’s No. 19 overall pick in the first round.