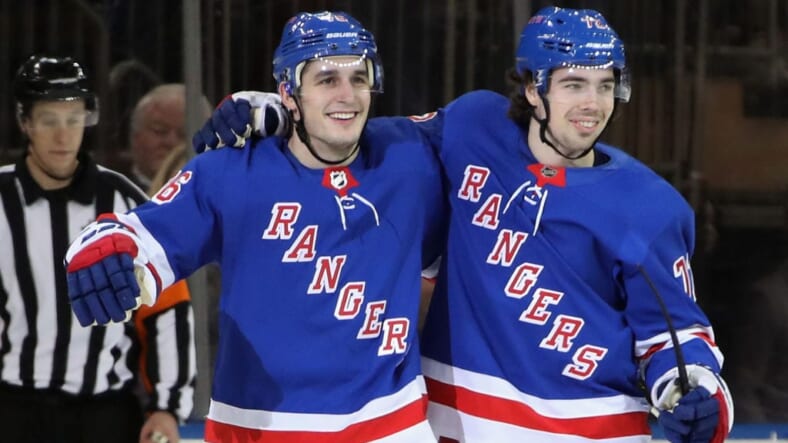 NEW YORK, NEW YORK - JANUARY 19: Brady Skjei #76 of the New York Rangers (L) celebrates his goal at 18:23 of the first period against the Columbus Blue Jackets and is joined by Filip Chytil #72 (R) at Madison Square Garden on January 19, 2020 in New York City. (Photo by Bruce Bennett/Getty Images)

Ryan Lindgren and Adam Fox have worked their way up through the season and were becoming one of the more trusted blueline pairings for the New York Rangers. Many did not even give Lindgren much of a thought when the season started, but his hard work and chemistry with Fox have turned them into trusted and reliable Blueshirts.

Lindgren started the season in Hartford

After a brief call up in the 2018-19 season, Lindgren started the season in Hartford where he posted one goal and one assist in nine games with the Wolf Pack. His hard work in the offseason had paid off, as when he returned to the Rangers, he looked much more comfortable getting back to defend and more confident pinching in the offensive zone. Lindgren also looked much more decisive with and without the puck. He excelled on the penalty kill and quickly formed chemistry with his defense partner and former developmental teammate Adam Fox. The two were nearly inseparable after Lindgren got called up from Hartford on Oct. 28. Coach David Quinn put them together, and they remained together for 58 of the 60 games Lindgren played.

Lindgren’s role with the team became even bigger when Brady Skjei was traded to the Carolina Hurricanes for a first-round pick at the trade deadline. Following the trade, Lindgren became the top and most trusted left-handed defenseman. In addition to being essential on the penalty kill, he also became a steady presence in big situations and late in games. Lindgren has one goal, 13 assists and is plus-16 in 60 games with the Blueshirts this season. He has also helped Fox thrive, as he has eight goals, 34 assists in 70 games.

The Fox-Lindgren pairing has thrived

The two 22-year-olds have a close friendship that goes back to the days when they played together as teenagers in the U.S. national team development program. That friendship has shown during their improved play this year and was mentioned in a recent Zoom conference call that was sponsored by the NHL. Fox jokingly said when asked about the physical pounding Lindgren, has taken this season: â€œHe had a streak of getting pucks to the face, high sticks â€” and it wasnâ€™t even the way he plays, it was just unfortunate bounces, so his face probably needed this quarantine a little bit to heal up.â€™â€™ He was a bit more serious when he was asked about Lindgren’s style. â€œHe thinks the game really well, and he compliments me so much. And heâ€™s willing to stay back and make smart outlet passes. And heâ€™s a tough guy. And I think the way I play, he just suits me really well as a â€˜Dâ€™ partner.â€™â€™ As well it should as Fox has been mentioned as a candidate for the Calder Trophy as the NHLâ€™s Rookie of the Year.

New York Ranger fans are happily realizing that Lindgren and Fox are both just 22-years-old and they have the potential to be the Rangersâ€™ top defense pair for years to come.