How the New York Rangers can fix their issues in net 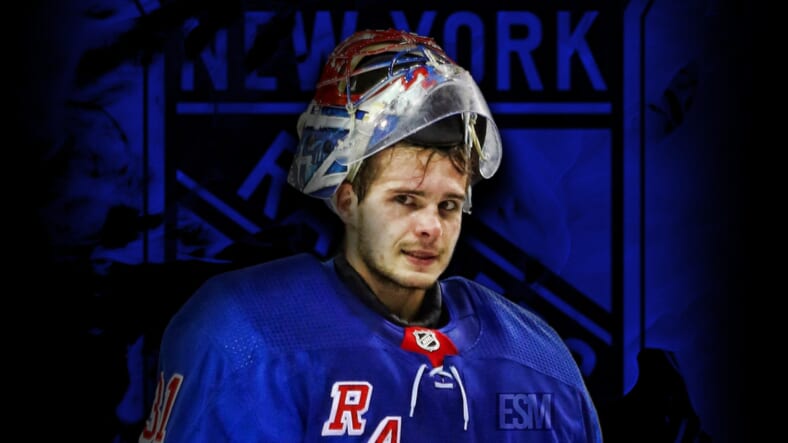 Blown leads, last-minute goals, and painful overtime losses have become a staple of the 2021 New York Rangers. They have held a lead in all but one of their eight games this year, yet they’re only 2-4-2, giving them sole possession of last place in the East division. There are a variety of reasons why they continue to give away games, but the biggest is obvious – poor play from their goalies. The struggles at the position have led the coaching staff to try unconventional ways of fixing the issue, yet all of their methods have failed thus far. In a 56-game season, every game matters. Here’s how the Rangers can fix their issues in net, and as a result, get their season back on track:

How the New York Rangers Can Fix Their Issues in Net

Very few Ranger players had as much offseason-hype as goalie Igor Shesterkin coming into 2021. The 25-year-old player from Moscow, Russia, had been advertised as New York’s goalie of the future last season, and in 12 starts, he looked the part. He went 10-2 as the starter, stopped 93.2% of the shots he faced, and surrendered 2.52 goals per game. Heading into 2021, it looked as though the Rangers, and Shesterkin in particular, were going to be a real force in the division.

Unfortunately for the Blueshirts, that offseason-hype has not translated to the ice this season. Shesterkin has struggled mightily this year, allowing 2.73 goals per game, stopping a measly 89.4% of shots faced and posting a 1-2-1 record. All of those numbers are bottom 10 in the NHL among qualified goalies. Because of those struggles, the team has shown no hesitation to put in their other goalie, Alexandar Georgiev. In most cases, this move would make sense. But not for the Rangers.

Georgiev has been even worse than Shesterkin so far in 2021, and he has shown no signs of improvement. He’s stopping only 88.6% of shots faced, giving up 3.27 goals per game, and has posted a 1-2-1 record so far this season. Yet despite his poor play, the coaching staff continues to give him opportunities. And in turn, they’re greatly halting the growth of their true No. 1 goalie – Shesterkin.

A number of NHL teams have adapted the goalie 1A/1B system over the years, and for some, it has worked very well. Dallas goalies Anton Khudobin and Jake Oettinger have both been among the best at their position so far, and their team is 4-1-0 through five games this season. The Stars had success using the same game-plan last year as well, but with Ben Bishop instead of Oettinger.

The Rangers are not the Stars, however.

New York is preventing Shesterkin from getting into any rhythm by swapping him out every single game. He had his best game of the season last Thursday night against Buffalo, allowing only two goals on 25 shots in a 3-2 OT victory for the Rangers, but what did he get as a reward for his stellar play? A seat on the bench for the next game. To make things even worse, Georgiev played terribly in said game, allowing five goals.

Help the Defense Build Some Confidence

There’s more to the goalie position than stopping pucks, though – and it appears head coach David Quinn has forgotten that. One of the most important aspects of the position is communicating with the defense and building relationships with your defenseman. It’s impossible for Shesterkin to do that successfully while sitting on the bench every other game. And as a result of Quinn’s inability to decide on a full-time starter, the defense as a whole is underperforming – particularly in big moments.

New York has blown a lead in five of their games this year, losing four of them. In each of those instances, it is clear the defense is not performing to their maximum potential. They haven’t had any opportunities to build chemistry with a goalie, and it would benefit them greatly if they got to play with Shesterkin for multiple games consecutively. Coach Quinn needs to recognize this before the season is too far gone.

There’s a reason Shesterkin was named the starter out of training camp – he is the future in net, after all. The Rangers must let him build confidence and rhythm if they wish to make the playoffs. The clock is ticking.